If you thought you saw a man climbing the Ambassador Bridge Saturday morning, you're not crazy.

After weeks of planning, Windsor musician Luke Heney scaled the concrete footing of the bridge near Huron Church Road and Riverside Drive around 4am. From there the 31-year-old began the 118-metre climb up a massive suspension cable to the south tower of the bridge — undetected.

Heney then braved cold winds and vertigo to hang a 25-ft wide banner on the south-side of the tower promoting his band 1988 just below the iconic Ambassador Bridge sign. After more than three hours perched high above the city, Heney was shocked that no one noticed he was there.

"I might actually just get away with walking out and no one even noticing I was up there. So as I was coming down I was about 100-ft from the bottom and there were actually no police on site yet," he says. "It was actually a construction worker that saw me and then called in, so police had arrived after I had already reached the base of the bridge." 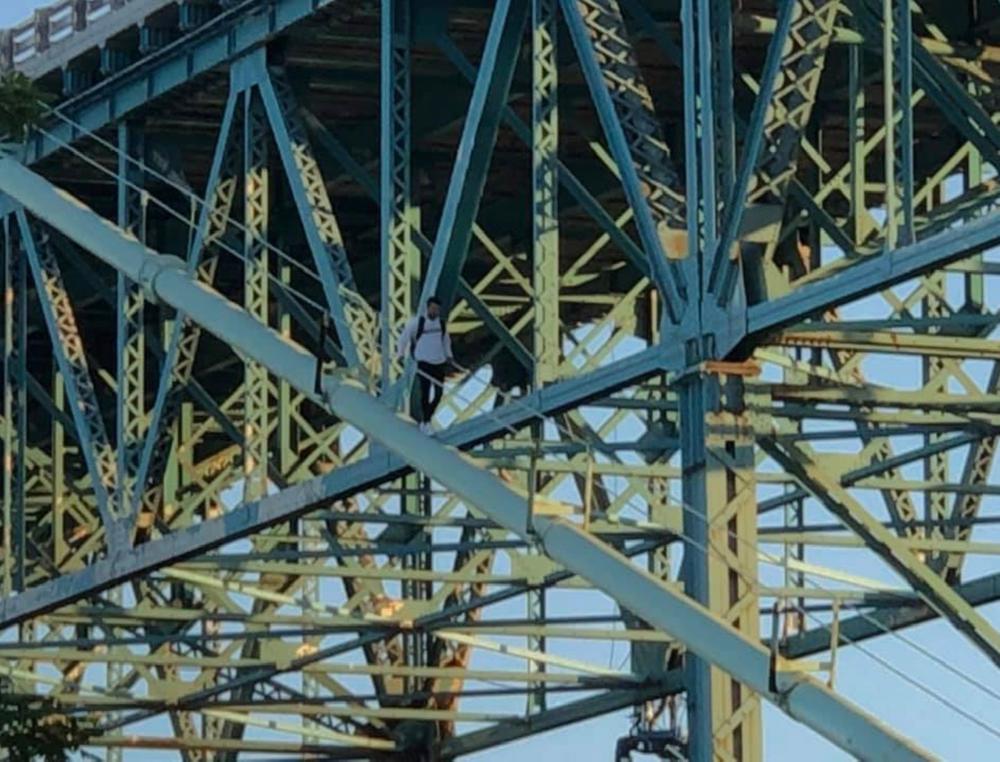 A Windsor man makes his way down the Ambassador Bridge near Riverside Dr. and Huron Church Rd. on Saturday September 14, 2019. (Photo by Ahmad Moussaoui)

He tells AM800 News a border patrol vehicle passed him on the way up when he was in eye-shot of the bridge's deck, but they never spotted him.

"I was also expecting, to be honest, the security of the bridge to be way more ramped up than that. For someone to get up the bridge and be there for over three hours in a very prominent spot, that's pretty crazy considering it's an international crossing," added Heney.

After spending hours in high winds with nothing but a thin railing between him and certain death, the gravity of what he'd done set in when he reached the ground.

Heney says police told him he's the first person on record to climb the tower untethered and return alive.

"It's something that I would absolutely not recommend to anyone; you have to understand the risk and I was prepared to face those risks. It was very calculated on my end," he says.

Heney says he's been charged with Public Mischief and is free on a promise to appear in court and must stay 500-metres from the bridge.

He says he knew what he was getting into and will face the consequences.