Vandalism forces Tecumseh to close park washrooms for the year

Damage caused by ongoing vandalism is forcing the Town of Tecumseh to close the washroom facilities in Optimist Park for the rest of the year.

The town says that damage to the washroom facilities has been extensive and included broken doors, setting fires to trashcans, tearing off soap dispensers and baby changing stations, soffits and roof damage, damage to downspout and eaves troughs, and purposely clogging toilets.

Director of Parks and Recreation, Paul Anthony, says the damage to the Optimist Park washroom this past weekend is "significant and will take time to repair."

For the remainder of the season, portable toilets will be available to service the park and tennis court users. The washrooms will reopen in spring 2022.

Anthony says they've experienced an increase of damage and vandalism this summer but it's not just Optimist Park that's been damaged, they've had the same problem at Lakewood Park.

"We've had people go in and take the soap dispensers, smash them and put soap all over the floor. They're also pulling the toilet paper off," he says. "Really, we're at a loss of words as to why an individual would go in and do this damage when these facilities are open to the public." 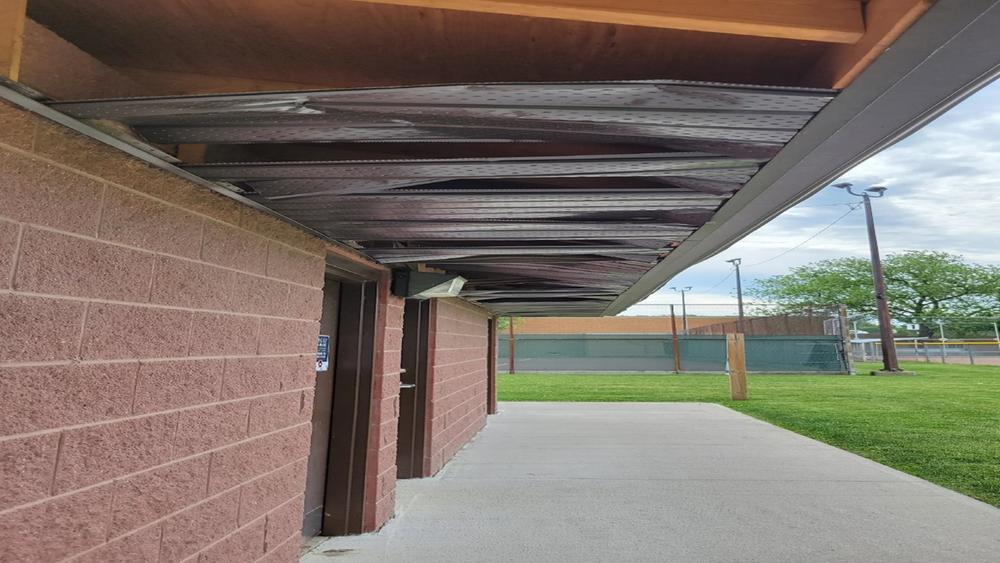 The Town of Tecumseh is closing the washroom facilities located within Optimist Park at 13731 St. Gregory's St. for the remainder of the season due to significant damage caused by vandalism. Sept. 8, 2021 (Photo courtesy of the Town of Tecumseh)

Anthony says they've noticed in the last year-and-a-half that the vandalism has increased.

"We don't understand why. They're there for the use of residents who are out walking and I'm certain when a resident goes in and see the disgusting look of what's there after the damage, they're upset as well," he says.

The town does not have an exact damage estimate at this time as they're still assessing the cost but Anthony says the damage does average around $2,000-$3,000 every time this happens.

The Parks and Recreation Department is working with the OPP and reviewing security video in an effort to locate the individuals responsible for the damages.