A contempt of court hearing against Unifor and four of its officers has been put over to Friday afternoon.

Nemak brought the motion to have the union, National President Jerry Dias, Local 200 President John D'Agnolo and two other officers held in contempt.

It's for the refusal to comply with the Ontario Labour Relations Board's Cease and Desist order over the blockade at Nemak.

Justice Terry Patterson made it clear how serious a matter it is to defy the order of a court, but also indicated the two parties need to be given time to resolve the underlying issue.

D'Agnolo says he got the message clearly, it's up to Nemak to reach out.

"The judge basically said that we need to sit down with the company" explains D'Agnolo.  "As you know we've been doing our best to work with the company but they have not gotten back to us.  I hope they call us as soon as possibe because we are ready." 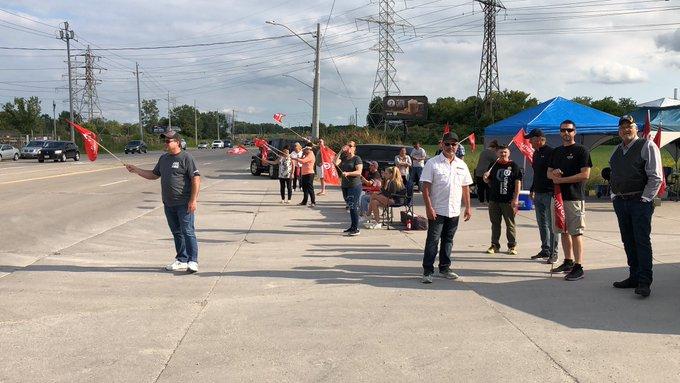 He says Unifor has constantly asked for the resumption of talks.

"We continually keep in contact with the company, I don't know how many times I have to say this" stresses D'Agnolo. "But first thing in the morning we usually call the plant manager and we have discussions and not once has he come to us and said lets sit down and talk because we're ready to talk."

D'Agnolo says he isn't focused on the fines Nemak's lawyers called for.

"I'm not going to talk on that because I'm hoping I have a resolve so we don't have to deal with those fines.  But as the judge says, we'll eventually have to deal with contempt and at that time he has to deal it" says D'Agnolo. "But right now I'm focused on getting the people back to work that's all they want.  They want to get back to work."

The company's other lawyer Michael Wells called on the judge to impose the fines because otherwise allowing the blockade to continue is "court sponsored extortion" of Nemak.

The blockade at the west Windsor aluminium casting plant began Labour Day Monday over the company's refusal to change its closure date of mid-2020, some two years earlier than Unifor says they agreed to in the contract.