A Windsor councillor is questioning the Windsor-Essex Economic Development Corporation.

Ward 3's Rino Bortolin is wondering why the development corporation recently sent out Christmas cards in support of a new acute care hospital in Windsor.

He's calling the cards "a waste of money."

The development corporation budgeted $270,000 to promote the new hospital and encourage residents to push the province to release more funding earlier this year.

Bortolin was one of four city councillors to vote against a motion in support of the hospitals proposed location at at the corner of County Road 42 and the 9th Concession.

He says the money could be better spent supporting businesses during the COVID-19 pandemic.

"Maybe getting small businesses that weren't online, get online," says Bortolin.  "A lot of the work have been left to the different BIAs to do and the businesses that are struggling are having trouble even just being able to adopt and keep up with all the changes."

"A lot of small businesses don't' have a good enough presence online, what if we had used that $270,000 and maybe even more to help get every small business in Windsor, a good robust online presence and that's just one example," he says.

Bortolin says the hospital location is a forgone conclusion.

"That I think is the most frustrating part, is that you're using this campaign to build consensus around our own residents," says Bortolin. "Consensus is earned and consensus should be built around making the right decision, not around a PR campaign." 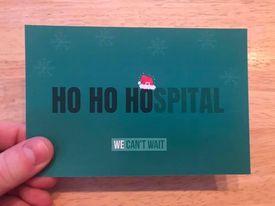 MacKenzie says the cards were sent out to about 2,000 registered supporters.

MacKenzie says it's to encourage them to keep reaching out to upper levels of government to release more funding for the project and has little to do with the location.

"You build an action group of constituents and then you keep them engaged, you keep giving them information, you say thank-you for supporting this and that's all the card was," he says.

MacKenzie says Councillor Bortolin has made it clear he's not in support of the hospitals location.

"If you just read into it a little bit, I think it has more to do with not agreeing with the decision that was made by the city and the county over five years ago," he says.

MacKenzie adds the budget to promote the project includes ads on billboards, lawn signs and several other public relations projects.