The Windsor Police Service is seeking information in the search for a suspect wanted in connection to a shooting outside a city bowling alley last month.

At 1 a.m. on Saturday, April 9, police responded to Super Bowl Lanes in the 10000 block of Tecumseh Road East at Forest Glade Drive for a calls about a large group of people fighting, with reports that shots had been fired.

It is believed there were approximately 20 - 25 people in the area when the shots were fired, with five men suffering non-life threatening gun shot wounds.

Police say four of the victims were targeted by the shooter, while a bystander was also shot.

The suspect has been described as a Hispanic male, 5'2 - 5'5 and 150 lbs. At the time of the incident, the suspect was wearing a yellow-brown coat with black sleeves, a grey hooded sweater underneath, black face mask and a blue baseball hat with the L.A. insignia of the Los Angeles Dodgers.

He’s considered armed and dangerous and police say if you see him, call 9-1-1 immediately. 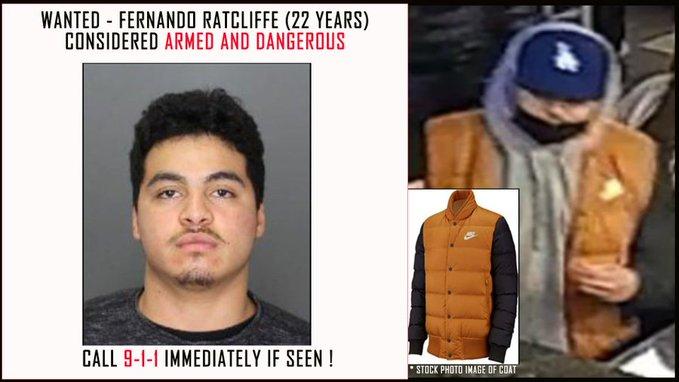 Fernando Ratcliffe (pictured) is wanted on several charges, including five counts of attempted murder, in connection to the April 9, 2022 shooting outside Super Bowl Lanes in the 10000 block of Tecumseh Road East at Forest Glade Drive. (Image courtesy of the Windsor Police Service)

In early April, police arrested 19-year-old Joshua Fryer of Windsor and 21-year-old Andrew Meloche of LaSalle in connection to the case. Each is facing seven charges including five counts of attempted murder.

A youth, who cannot be identified under the Youth Criminal Justice Act, also faces seven charges including five counts of attempted murder.

A 21-year-old Amherstburg male and a 21-year-old Windsor male have also been arrested and charged with accessory after the fact to attempted murder.