Soccer fans around Windsor have come together to cheer on Team Canada in the FIFA World Cup.

On Wednesday, Manchester Pub in downtown Windsor was a sea of red jerseys as fans sat together to watch the game on the walls filled with televisions.

Although the crowd went home disappointed with the loss, the community is strong and will continue to rally on Canada, who hasn't been to the World Cup since 1986.

Windsor resident and soccer fan, Marjorie Sakalo, was one of many in attendance during Wednesday's game.

She says Canada deserves to be at the World Cup.

She says she and her family are fans of the sport.

"I am a soccer fan! I played as a kid, my daughter plays OPDL soccer in Tecumseh currently. I volunteered in LaSalle before Tecumseh so I'm a lifelong soccer fan." 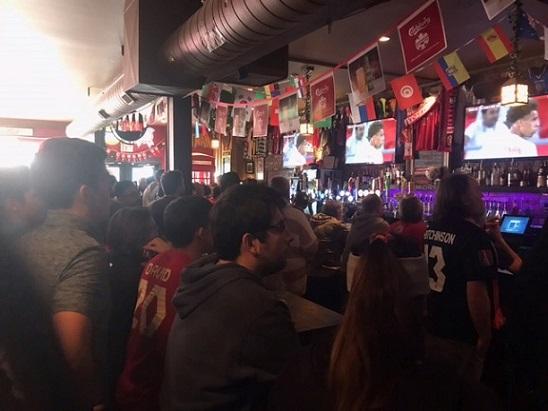 Stephen Hargreaves, Spokesperson for Manchester Pub, was thrilled to see the crowds and says they were close to hitting capacity during the game.

He says despite the loss, Canada played an amazing game.

"Canada decided to qualify for the first time since 1986 in Mexico. And so far, they look pretty decent. I'm a massive fan of football, I watch football all year round, I think I'm a pretty good judge of if a team looks good or not and Canada looks a lot better than I expected them to."

He says soccer hasn't always been a sport that Canadians cared about, but there's a big shift now that Canada has qualified.

"There's a lot of people who really, really care about this sport. And, especially now that Canada is involved, whether they were born on the other side of the world or born here, much like a lot of players on the team, they are very Canadian and they love it."

Canada will play their second game on Sunday morning starting at 11 a.m. against Croatia.