Work is moving full stream ahead on a new parkette in Windsor that will be home to a sculpture of Hiram Walker.

The new parkette on the southeast corner of Riverside Drive East and Devonshire Road will include the sculpture of the founder of Walkerville, which is still home to the whisky distillery that bears his name.

A celebration in honour of Hiram Walker’s 206th birthday will be held to inaugurate the parkette during the Canada Day long weekend.

James Chacko, Executive Director of Parks and Facilities for the City of Windsor, says they've been able to pick back up on work that started in the Fall of 2021.

"Ever since the the weather has turned this Spring, the project is on track, we're ready," he says. "Barring any set back due to weather, COVID, or something else, we'll be ready to have that park unveiling as part of the anniversary for Hiram Walker's birthday this July."

Chacko says it's going to be a beautiful parkette that will tie in a lot of features, colours and materials that will blend in nicely with the overall Walkerville area.

"You're going to see the Hiram Walker statue up on a very nice plinth. He's going to have the whisky barrels underneath him, it looks gorgeous, I've been fortunate enough to see the statue," he says. "The parkette itself will is going to be very nice, it ties in very nicely and honours the historic nature of the Walkerville area." 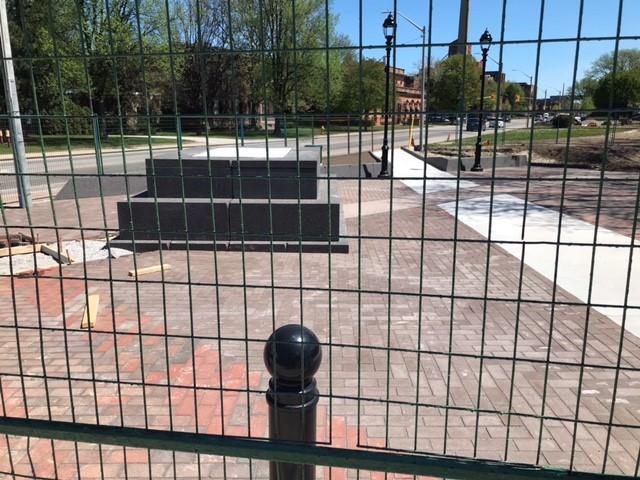 Work is moving forward on a new parkette in Windsor that will be home to a sculpture of Hiram Walker. The grand unveiling on the southeast corner of Riverside Drive East and Devonshire Road is expected Canada Day weekend 2022. May 13, 2022 (Photo by Rob Hindi)

Chacko says they're still trying to figure out the logistics of installing the statue.

"We want to make sure that Hiram Walker is installed safety but also have him under wraps so there is a great unveiling," he says. "We're still working through the logistics of how early we can have him there in place and then how to properly cover him up so he's safely kept under wraps for the great unveiling.

The city was hoping to unveil the $400,000 eight foot bronze statue at the corner of Riverside Drive and Devonshire Road in a roundabout in the Summer of 2020, but those plans were delayed due to the COVID-19 pandemic.

The parkette and sculpture will be the first gateway to the Walkerville neighbourhood as part of the city's proposed Walkerville Theming and Districting Plan.