Work underway to upgrade parks and trails in Windsor's Ward 10

The City of Windsor is launching the final phase of a $1.1-million parks improvement project focused on two parks in Ward 10.

Work will begin this month to build 400 metres of accessible multi-use trails in Langlois Court Park located on South Pacific Avenue, and a second 600-metre multi-use trail will be installed in the adjacent Southdale Park.

Both asphalt trails will be 10 feet wide, nearly double the width of the 30-year-old pathway that is being replaced.

The trails are an extension of the new 660-metre multi-use trail that was built last year from Parent Avenue East to South Pacific Avenue in Langlois Court Parkette. 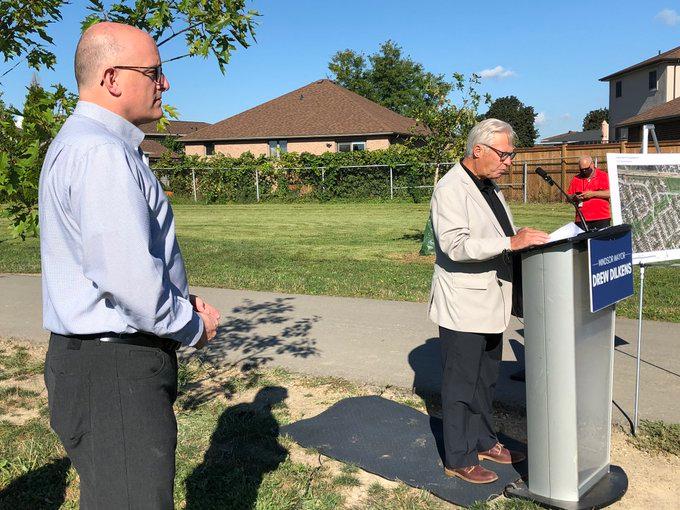 Windsor Mayor Drew Dilkens (left) and Ward 10 City Councillor Jim Morrison (at the podium) announce the final phase of a parks improvement project that will focus on upgrades and trail improvements in Langlois Court Park and Southdale Park. Sept. 16, 2021. (Photo by Rob Hindi)

Ward 10 Windsor City Councillor Jim Morrison says the old trail was 30-years-old with all kinds of cracks and no drainage.

"You get into low spots and it was really cracked up and everything," he says. "So it would be a mess every time it rained, in the spring time it took a long time to dry. It just wasn't safe for kids. They couldn't ride their tricycles or anything like that."

Morrison says this trail is an extension of Remington Park's trail system.

"You go through further up to Southdale Park and everything, we're talking about 2.4-kilometres of trail. It loops around, so you could do it a couple of times if you want," he adds.

The project at Langlois Court and Southdale Parks will also include drainage improvements, 21 new benches with concrete pads, LED lights, some picnic tables and around 150 new trees planted between both parks.