A new apartment complex is being proposed for a vacant piece of land along Lauzon Parkway in East Windsor.

Monday's meeting of the city's Development and Heritage Standing Committee will consider a rezoning application to make way for the construction of three four-storey buildings each with 23 units and a total of 88 parking spaces.

The property is listed as 2601 Lauzon Parkway but includes access off Enterprise Way, sitting behind a commercial plaza that includes John Maxx Sports and Wings and Planet Fitness.

Ward 8 Councillor Gary Kaschak says he sees it as a great infill development for the east end, in a very walkable area.

"You can get to groceries and gas stations, restaurants and so forth. You're very close to Tecumseh Road, Lauzon Parkway and the EC Row Expressway, if you need to get into your vehicle and go. Of course, Transit Windsor has two transit routes nearby and the main terminal behind Tecumseh Mall," he says.

Another commercial plaza, Parkway Mall, is also located nearby which includes Zehrs and Winners. 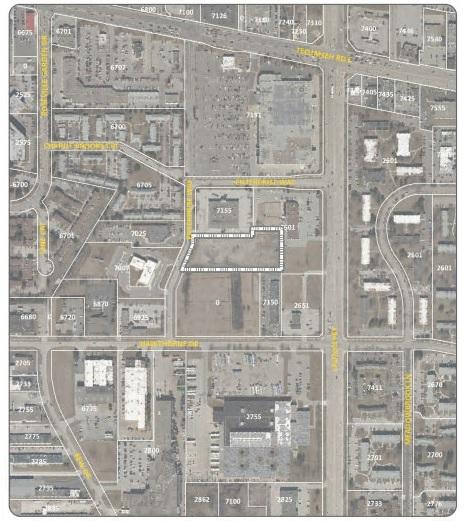 Rezoning is being sought for a piece of land (surrounded by the white lines) off Lauzon Parkway for the development of three four-storey buildings with 23 units each and 88 parking spaces. June 30, 2022 (Image courtesy of the City of Windsor)

Kaschak says it's good news for the east end, which has always had vacant land for many years.

"Development was few and far between but now with many people moving into the city, good economic development, a six per cent growth rate in Windsor in the past few years, it's the place to be," he says. "The east end has some of that land and infill development like this, it's fantastic."

Administration is recommending the rezoning application be approved when the Development and Heritage Standing Committee meets at 4:30 p.m. Monday.

Kaschak believes this just adds to the on-going growth in the area which already includes plans for an apartment development next to Tecumseh Mall and a $250-million residential development at the site of the former GM Trim plant near the WFCU Centre.

"A 1,000-plus homes, residences for people, in an area that has quite a few amenities already. So you can get to the hockey game or a concert at the WFCU, and all the other amenities nearby. I'm very happy to see that," he adds.

In September 2019, Farhi Developments announced plans to invest around $250-million to rework the vacant property that was once home to the GM Trim plant, with the plan calling for over 100 single family homes and multiple condo buildings, including two nine storey structures.

In October 2021, the committee endorsed a rezoning application to allow for the construction of five six-storey buildings with a total of 390 units and 498 surface parking spaces, on land right next to Tecumseh Mall near the rail tracks along Lauzon Parkway.