The guitarist was found unconscious at around 11:30 a.m. (6:30 a.m. ET) by girlfriend Monika Dannemann inside her apartment at the Samarkand Hotel. Paramedics rushed Hendrix to hospital, where Dr. John Bannister pronounced him dead at 12:45 p.m. (7:45 a.m. ET).

A coroner ruled that Hendrix, who had a long history of drug and alcohol abuse, died of asphyxia while intoxicated on barbiturates. (Dannemann said Hendrix took 18 times the recommended dosage of her prescribed sleeping pills.)

The guitar legend, who would be turning 78 in November if he had lived, had a couple of ties to Canada.

His father James Allen Hendrix was born in Vancouver in 1919 and although Jimi was born and raised in Seattle, he often visited his paternal grandmother Zenora Rose Moore in B.C.

Not all of Hendrix’s memories of Canada would have been so nice.

When he arrived in Toronto on May 3, 1969 ahead of his sold-out concert at Maple Leaf Gardens, Hendrix was detained by Customs officers at the airport for four hours after they found suspected heroin and hashish in his luggage.

Hendrix was charged with drug possession. He was released on $10,000 bail and performed as scheduled that night. 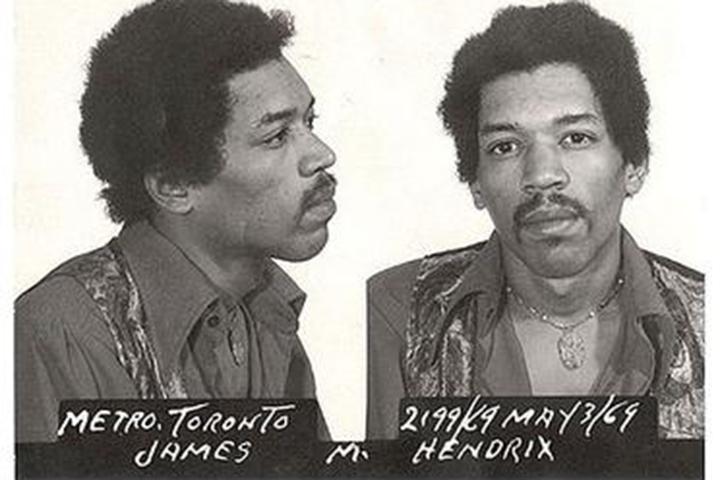 On Dec. 7, a day before Hendrix was due to stand trial in Toronto, he was arrested again at the airport when Customs officers found a capsule with an unknown substance in his guitar case. The musician was held in custody overnight but released when a lab test determined the substance was not illegal.

After a three-day trial, the jury deliberated for more than eight hours and came back with a not-guilty verdict.

“Canada has given me the best Christmas present I ever had,” Hendrix told reporters.

Listen to music from Jimi Hendrix