“Everyone knows that Black Lives Matter was a scam,” the rap star wrote in an Instagram Story. “Now it’s over. You’re welcome.”

Ye was slammed by many people after sporting a shirt with “White Lives Matter” on the back during Paris Fashion Week. The phrase has been used by white supremacist groups and denounced by the U.S.-based Anti-Defamation League.

Conservative commentator Candace Owens, an outspoken critic of the Black Lives Matter movement, also sported a shirt emblazoned with the slogan, as did several models in the show. 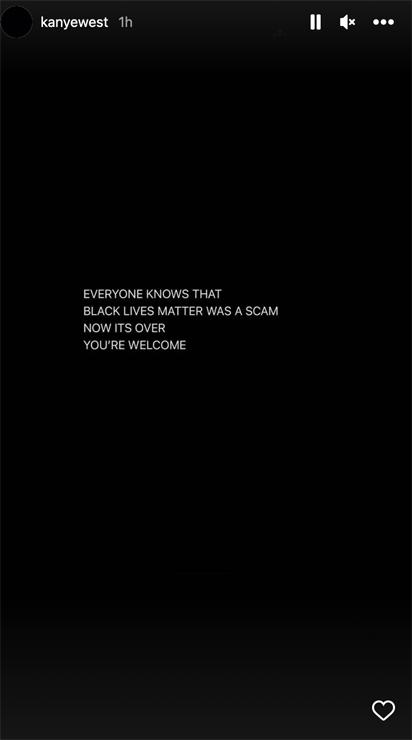 Author Marc Lamont Hill opined: “Kanye West decision to wear a ‘White Lives Matter’ shirt is disgusting, dangerous, and irresponsible. Some of y’all will rush to defend him. You should ask yourselves why…”

Ye’s fellow rapper Boosie BadAzz blasted him on Twitter. “AFTER ALL WE BEEN THROUGH AS A RACE YOU PUT THIS DISRESPECTFUL S**T ON!! U GIVES NO F**KS ABOUT HOW BLACKS HAVE DIED N SUFFERED TO THE HANDS OF THE WHITE MAN N U SAY BUSH DONT LIKE BLACK PEOPLE.. REALLY ’N***A.’”

Jaden Smith tweeted that he left the show after seeing Ye’s fashion statement. “I Don’t Care Who’s It Is If I Don’t Feel The Message I’m Out,” he tweeted, followed by “Black Lives Matter.” On Tuesday morning, Smith tweeted: “Think For Yourself, Have Your Own Opinion” and “Follow Your Own Morals Instead of People.”

They each have also already SHOWN that white lives matter very VERY much to them.

Who else is bored by every antic they try? https://t.co/VsUSD7KFSl

Ye has previously sparked outrage with his comments about race. In 2018, he said slavery “sounds like a choice.” He added: ”When you hear about slavery for 400 years ... like, you was there for 400 years and it's all of y'all?! It's like we're mentally in prison." The rap star later tweeted: "Of course I know that slaves did not get shackled and put on a boat by free will,” he tweeted. “My point is for us to have stayed in that position even though the numbers were on our side means that we were mentally enslaved ... Once again I am being attacked for presenting new ideas."

In calling Black Lives Matter “a scam” on Tuesday, it’s not clear if Ye is referring to the movement or the organization. The latter has come under scrutiny for a lack of transparency and some questionable spending.

Listen to music from Ye