Holden Nowell, who starred in the 2012 video for Carly Rae Jepsen’s hit “Call Me Maybe,” has claimed he was “viciously and brutally assaulted” by police officers on a Saskatchewan highway.

Nowell, 33, said he was driving with his then fiancée Shelby Lynn and their infant daughter Aramaya on the morning of July 6 when he was pulled over. (He did not disclose why his vehicle was pulled over.)

“I didn’t have my wallet with me in the car and I failed to provide ID,” he admitted, in a video posted on Instagram on July 10. “[The police officer] told me I was under arrest. I said ‘I’m not getting out of the vehicle’ and one thing led to another.”

Nowell alleged that he was pepper sprayed, pulled from his vehicle and assaulted by several officers. He shared a brief video clip showing three officers attempting to take him into custody.

Nowell said he was charged with obstruction, resisting arrest and assaulting a police officer.

"Once we have successfully defended my case and get my charges dropped we will be hiring another lawyer and filing a civil suit against the officers for endangering and assaulting a minor, using excessive force, etc.," Nowell told iHeartRadio.ca, claiming that his daughter was in the vehicle when the officer released the pepper spray.

In the video he posted on July 10, Nowell admitted he “pushed” an officer’s hand away but in a written message the following day, he claimed he “regretfully did not” assault the officer even though he “should [have], and would [have] been well within my God given rights to.”

Contacted by iHeartRadio.ca, Moose Jaw Police Service declined to provide any information about Nowell’s arrest over the phone and did not respond to a follow-up inquiry via email. 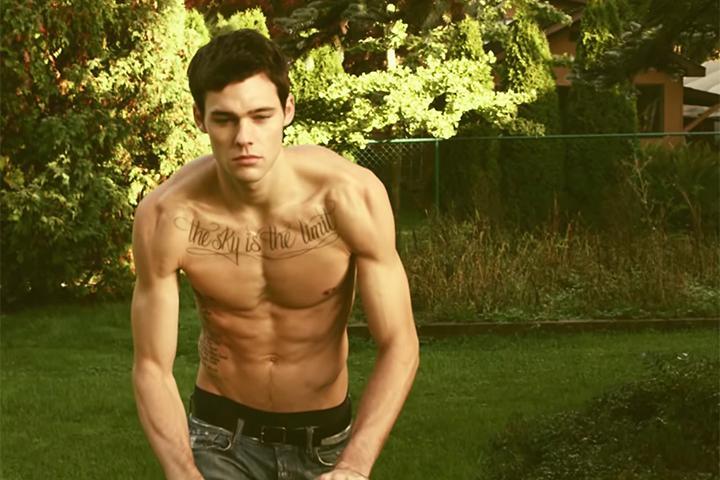 After being released from custody, the former model who performs rap as SixXx’Tre, took to Instagram to ask his followers for support.

“We’re doing OK financially right now but we don’t have a ton of money and lawyers cost a lot of money,” Nowell said. “And not only will I be pleading not guilty to all these charges I will be pressing charges against the police officers who assaulted me and pepper sprayed my fiancée and my daughter.

In a follow-up post, he wrote: “If you’re able to help us in any way please contact us. Whether that is in the form of prayers, donations, gift cards, food/meals, resources, council, healing, whatever.

“I never ask others for help. But right now I am. I feel embarrassed/ashamed and unworthy/undeserving of asking for/receiving anyones help because of my pride but we’re hurting a great deal right now and this process feels insanely daunting and I don’t know what else to do.”

Nowell told iHeartRadio.ca: "What happened my family and I was not only wrong, it was horrific, immoral, emasculating and traumatizing for all of us and I will do whatever it takes and find a way to make and raise as much money as necessary to make sure these men are held accountable and ensure that my daughter gets restitution."

MORE: Holden Nowell Tries To Move Past "Call Me Maybe"

Nowell wrote in an Instagram post that the criminal offences will “absolutely 100% affect my ability to work, travel, get a loan, own a firearm, etc., and ultimately have a massive negative affect on my entire families (sic) future.”

(In 2018, Nowell told iHeartRadio.ca that he spent time behind bars on drug and assault charges.)

In an Instagram post in March, Nowell told his followers that he and Lynn had separated because he was “verbally and physically abusive.” (They were married on Aug. 20.) He confessed in a June 19 post to having struggled with addiction (“getting drunk and high more than ever”) in the first months of his daughter’s life. (She is now a year old.)

In June, Nowell called Justin Bieber “one of the most Satanic puppets in the game these days” and accused the pop star of “pushing [the] satanic agenda by gender-blendering and wearing women’s clothing.

“He’s rocking pearl necklaces, women’s clothing, rocking his hand on his hip a lot more than he used to … carrying women’s bags.

Nowell also accused Bieber of “saluting Satan” with subliminal messages in commercials and billboards for his Tim Hortons partnerships. (Nowell said the launch of Biebs Brew was timed for 6/6/2022 – or 666.)

Nowell has also used his platform to spread misinformation about COVID-19, which he has described as “a virus that is … killing no more people than the common cold or flu.”

He has aligned himself with conspiracy theorist Chris Saccoccia (aka Chris Sky) and took part in “freedom convoy” protests in western Canada.

In one video message, Nowell made the outrageous claim that vaccines are responsible for the death of “hundreds if not thousands of athletes” whose “hearts are exploding in their chests.”

Last month he wrote: “How many more ‘va**inations’/upgrades will you continue to allow the government to force inside your body and the body of your wives, husbands, children, parents, grandparents and loved ones?” (Vaccines are, of course, optional.)

In 2018, Nowell told iHeartRadio.ca that he was paid only $500 for his role in the “Call Me Maybe” video, which has racked up nearly 1.5 billion views.

In the video, his character captures Jepsen’s attention after he arrives in her backyard to mow the lawn. The video’s twist, though, is that Nowell’s character is more interested in Jepsen’s male guitar player – something he said made him uncomfortable.

“I didn’t like being known as the gay guy in the ‘Call Me Maybe’ video,” said Nowell. “It was just something I wasn’t used to.”

He added that he grew "really sick" of being recognized everywhere he went as the guy from the "Call Me Maybe" video. “It’s what people began to recognize me as and know me as, and it was only that,” he said. “It was really difficult for me and really frustrating."