Lizzo and Ciara were on hand Monday to help Missy Elliott unveil her star on the Hollywood Walk of Fame.

“You are the brightest star in the universe,” Lizzo told the 50-year-old hip hop icon. "I watched you my entire life and I saw a superstar in you – but I also saw myself and I’d never seen myself before and you lived so boldly and so beautifully and so unapologetically and so out loud.

Ciara, who has collaborated with Elliott on several songs, praised her for creating her own style: “She paved the way for me and so many others who followed. There was no one like Missy … There is only one Missy.”

Elliott, who was introduced by longtime manager Mona Scott-Young, was visibly emotional when she stepped up to the podium. “I’ve come here 20-something years ago and just used to walk past all these stars and just imagine,” she said. “It’s just a blessing to dream big and it truly happened. I’m truly standing here.” 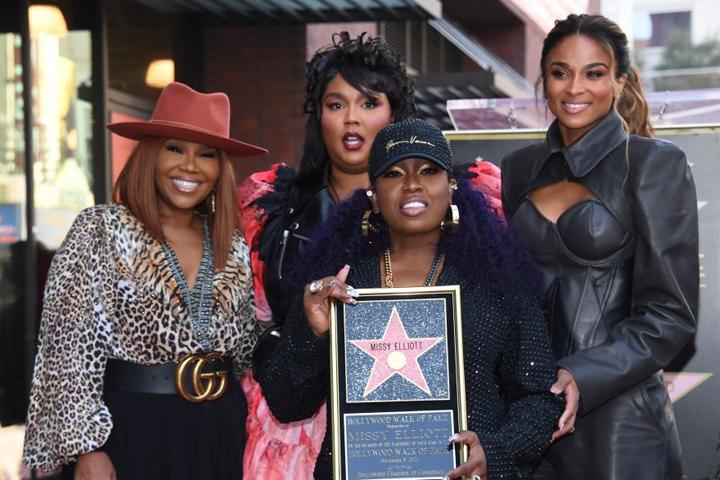 Elliott dedicated the honour to other female hip hop artists. “To my sisters in hip hop. I wanna say I love each and everyone of y’all. The ones that’s popping now, the ones that’s about to be popping,” she said. “But I want to give a big, big shoutout to the godmothers of this, and that is Queen Latifah, Monie Love, Sha-Rock, Angie Stone, Roxanne Shanté, Yo-Yo, MC Lyte, Salt-N-Pepa.

“I know I’m probably missing some, but all of y’all that started before me, because y’all are the backs that we stand on. Y’all are the foundation. Y’all ran so we could walk, y’all stood up for something so we could sit comfortably, so I thank y’all for this moment.”

Elliott ended by joking: “I’ll be back every night for the rest of my life laying by my star.”

Elliott released six studio albums between 1997 and 2005 and has collected four Grammy Awards. She was the first female rapper inducted into the Songwriters Hall of Fame and received the Michael Jackson Video Vanguard Award at the MTV VMAs in 2019.

Hollywood Walk of Fame inductees are chosen by a panel of the Hollywood Chamber of Commerce from hundreds of submissions approved by the nominees or their reps. The honouree must agree to attend an unveiling ceremony within two years. A $50,000 USD fee is required for installation and maintenance of the star.

Listen to music from Missy Elliott, Lizzo and Ciara