New North Peace pool could be a decade away, public engagement continues

The North Peace Leisure Pool Commission continues to ask everyone to ‘jump in’ with their thoughts on a new multi use recreation and aquatics facility.

Even the city admits the current pool in Fort St. John is aging with replacement studies that started almost four years ago.

North Peace Leisure Pool Commission Chair Trevor Bolin said “It’s great to be able to dive back in. We have a lot of information that we collected in 2018/2019 and now it is ensuring that it is still relevant and that we’re ready to move forward”

Bolin blamed the pandemic for the stalled feasibility study. However, with work restarted it’s about determining the size and cost of a new facility.

The idea of a new pool excited a young boy at the nearby spray park who wants it to be massive.

“So big, like a hundred million big,” he said.

A number not that far off the estimated up to $100 million price tag reported in previous studies.

Yet, it seems Fort St. John is ready to pay for a new multi use facility.

City Councillor Lilia Hansen engaged with residents at the display boards with sticker voting on Tuesday night. She emphasized the idea to have a recreation space with as many uses as possible. 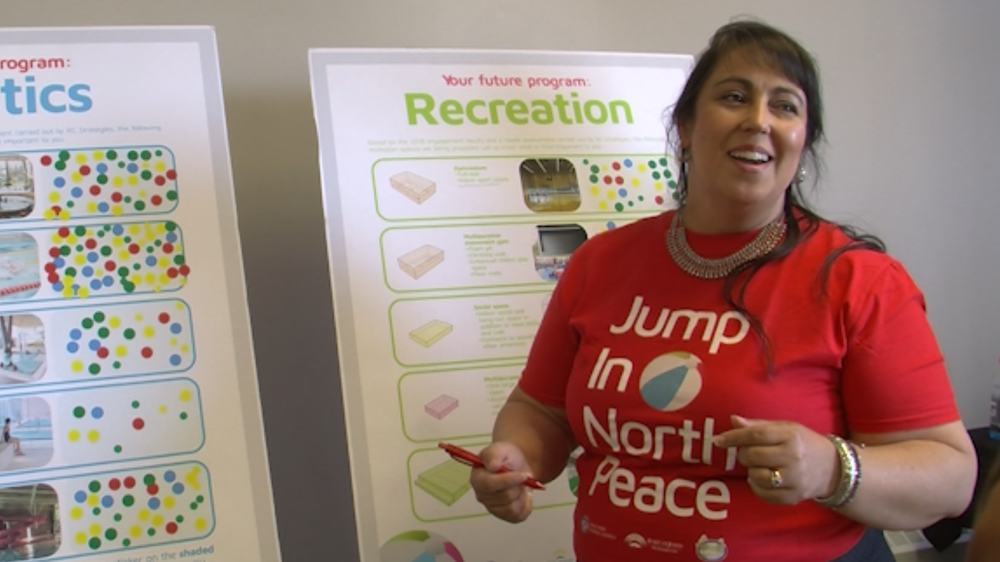 One example Hansen gave was from Prince George where there is a dual purpose gym in their recreation facility.

“Basically it’s like a large gymnasium with dividing partitions between. You have different meetings in rooms,” she said.

Hansen said there is a need for a larger conference space in the city and a multi use space could fulfill that void.

The District of Taylor also took part in discussions Tuesday. However, they’re waiting to see how much a new facility could before committing.

Taylor Councillor Brent Taillefer said “So if we’re looking at the future and what a pool looks like. It’s better to have someone at the seat that can be part of that.”

With details like the number of waterslides still unknown, the youngest residents hope local governments can dream big.

Back at the spray park, one girl said she wanted “unicorns and sharks.”

That while the boy hoped he could park “a speed boat” in a new facility.

Yet, this will likely be pool for the children of those kids.

Bolin says it could be a decade before anyone will swim at a new pool in the North Peace.

“Building our facilities for 50 years, for 60 years. What were planning today is planned 10 years from now. But it’s also planned for use 50 years from then,” Bolin said.

The in person open house Tuesday is followed by a virtual event Thursday. That’s along with an online survey available here until July 7.