Update: Simon & Schuster has admitted the signatures were in a "penned replica form" and announced it will provide full refunds to anyone who bought one of the "hand-signed" books. Details here.

Did Bob Dylan take pen in hand and autograph 1,000 copies of his new book The Philosophy of Modern Song? The answer, it seems, is blowin' in the wind.

The 81-year-old music legend rarely signs his name on anything – so when Simon & Schuster started hyping an “Exclusive Edition Signed by BOB DYLAN” on its website, collectors jumped at the chance to pay $599 U.S. or $799 CAD for copies.

(On eBay, copies of the signed edition of The Philosophy of Modern Songs are currently selling for between $2,670 and $10,011.)

“When it comes to getting his autograph, it’s a difficult task that is rarely done,” Tim Santons noted at Tales From The Collection last month. 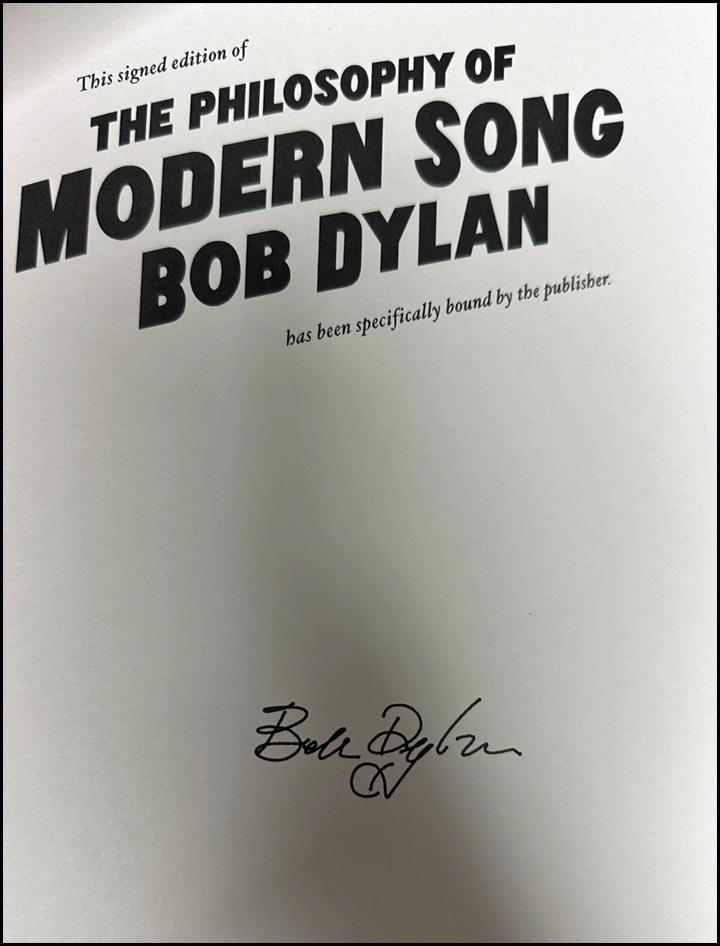 The signature on the title page of Bob Dylan's book. Autograph Live

But, in online forums many collectors are raising suspicions that the books were, in fact, “signed” using autopen, a device that replicates signatures. Not surprisingly, autographs created with this technology are significantly less valuable than genuine ones.

“The signature in it has the tell tale signs of auto-pen (uniform signature, unlike other Dylan signatures, dots at start and end points, feathering),” opined one person in a Reddit thread.

Collectors point to a response last month from Indigo after the Canadian retailer was confronted with questions about the authenticity of the autographs.

According to a screenshot shared on the Autograph Live forum, Indigo president Andrea Limbardi said in an email to one customer: “We have had to cancel the orders placed for this signed edition. The publisher and the artist have decided to take a different direction for the signed version of the book and, at this point, will not be selling it in any retailer (including Indigo).”

Limbardi added: “I know … that getting a signature from Dylan is rare so I am sure there must be deep disappointment.” 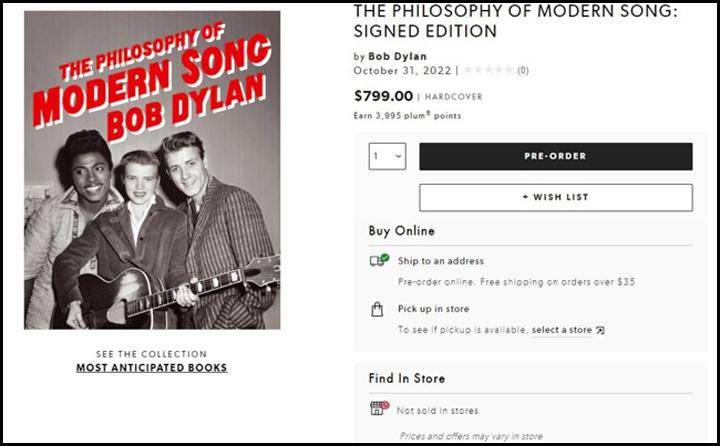 People who ordered the signed books from Indigo received notice that the book would “not be available through any North American retailer at this moment.”

Melissa Perri, Indigo’s manager of public relations, did not immediately respond to a request from iHeartRadio.ca for more information.

On its website, publisher Simon & Schuster is selling the “Exclusive Edition Signed by BOB DYLAN” of The Philosophy of Modern Song to U.S. customers only, boasting that the books are “guaranteed to be personally hand-signed by Bob Dylan!”

Simon & Schuster claims on its website that the books are "hand-signed" by Bob Dylan.

The books are being shipped with a letter, dated Nov. 15, from Simon & Schuster president and CEO Jonathan Karp that reads, in part: “You hold in your hands something very special, one of just 900 copies available in the US of The Philosophy of Modern Song signed by Bob Dylan.”

Karp’s letter concludes with: “This letter is confirmation that the copy of the book you hold has been hand-signed by Bob Dylan.”

The same letter – except stating that only 99 copies of the signed book were available in the UK – was sent to customers there, signed by Suzanne Baboneau, managing director of the Adult Publishing Division of Simon & Schuster UK.

Retailer Coles took down the signed book's page on its website shortly after listing it as "out of stock." 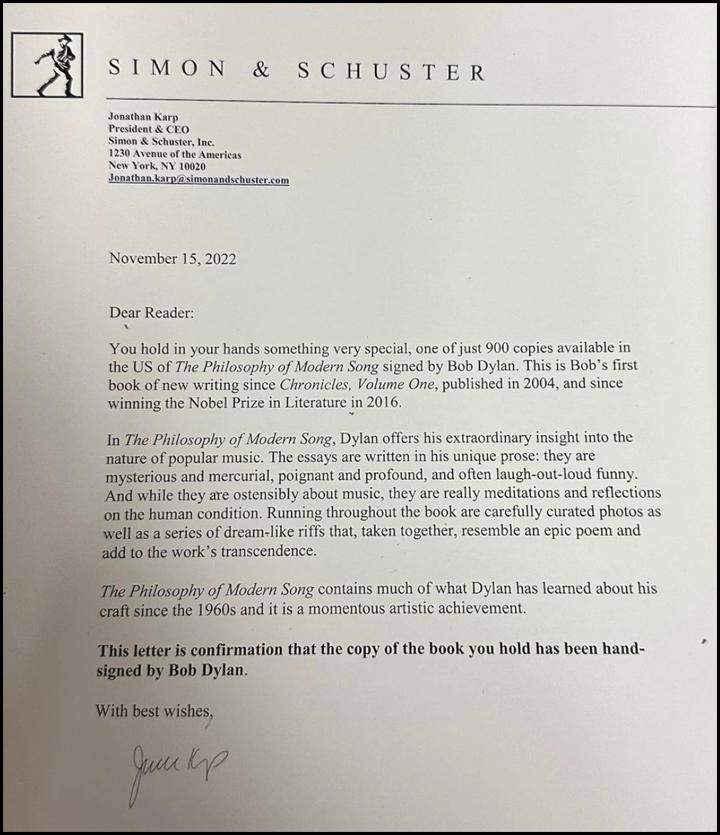 “The question is would a large publisher like Simon & Schuster …risk its reputation by knowingly flogging fakes on its own e-commerce platform?,” wrote user Mikenmar2 in the Autograph Live forum.

“Of course they knew,” claimed crazyrabbits23. “You don't suddenly pull every sold copy from a Canadian retailer (the biggest in the country) at the eleventh hour (while subsequently proclaiming that you've decided to ‘go a different route’, i.e. corporate-speak for, ‘Whoops, we got caught out.’) without knowing about what happened.”

User 5816nick alleged “it is blatant fraud” and InkInvestor called it “straight up deception.”

Karp did not immediately respond to a request from iHeartRadio.ca seeking his assurance that Dylan hand-signed the books and that autopen technology was not used.

Adria Iwasutiak, vice-president and director of publicity at Simon & Schuster Canada also did not respond to questions about the sale of the books in Canada.

Unsigned copies of the book are currently selling in Canada for $33 at Amazon and $55 at Indigo.

Listen to music from Bob Dylan