Your support can help doctors and medical staff at the Children’s Hospital Foundation of Manitoba continue caring for kids like Mitchell when urgent treatment is needed most. 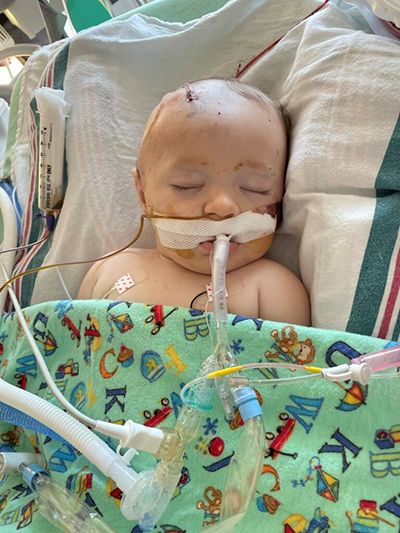 Mitchell had fallen at his home in La Salle and bumped his head. When the 6-month old’s eyes started rolling back, the family decided to seek out additional care. After an assessment at the Oak Bluff Paramedic Station, it was determined Mitchell should be taken to HSC Children’s for pediatric trauma care.

After a series of tests, the family was told that there is a recommended 6-hour watch-and-see period before young children receive a CT scan in order to potentially prevent unnecessary Xray radiation from affecting brain development. After a 4-hour period of check-ups, a large bruise formed on Mitchell’s scalp from the blood that was collecting under his skin. This isn’t usually cause for concern, but into the 5th hour, Mitchell started vomiting and became very pale causing an escalated need for the CT scan.

“He was crashing,” said Mitchell’s mom, Jillian. “The nurse grabbed him and took him into the resuscitation room.”

According to staff, the CT scan revealed one of the largest accumulations of blood between the skull and brain membrane ever seen in a baby. Mitchell required urgent neurosurgery for the brain bleed, along with a blood transfusion.

Mitchell was taken from the ER to the surgical floor where surgeons performed the operation. He was then moved to the Pediatric Intensive Care Unit to be monitored by intensive care nurses.

To their surprise, only 12 hours later, Mitchell was shown to have a perfectly healthy brain with no damage.  He was later moved to the recovery ward and discharged 4 days later. 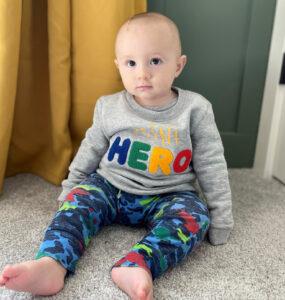 Jillian came to realize how important CHF is for ensuring correct care is provided at the start of any medical journey. “The doctors that saved Mitchell are our forever heroes”, she said.

Click here to make a one-time donation that can Continue Caring For Kids. Or become a Monthly Miracle Maker today!

To learn more about other kids who have benefitted from continued care at the Children’s Hospital Of Manitoba, visit CHF’s website.