The City of Victoria has confirmed the existence of a fourth privacy breach involving Victoria Councillor Ben Isitt’s email access that occurred in 2020, moving back the timeline over which a series of repeated privacy breaches relating to Isitt’s email practices have taken place in 2020 and 2021.

“…the Red Cedar Café privacy breach occurred in 2020,” City of Victoria Head of Engagement Bill Eisenhauer replied when asked for comment in relation to information contained in a letter authored by a City of Victoria privacy analyst and obtained by CFAX 1070.

The newly obtained letter is dated January 14, 2022, and was sent the day following the broadcast of CFAX 1070’s coverage of three confirmed privacy breaches in 2021 involving Isitt’s councillor email access and provisions of the Freedom of Information and Protection of Privacy Act (FOIPPA). The new letter contains seven recommendations intended to prevent future privacy breaches from occurring.

“The City conducted and has concluded privacy breach investigations in response to the incidents of emails sent by Councillor Isitt regarding the Red Cedar Café, the City budget on November 17, 2021 and Councillor’s Isitt’s work as a councillor on December 14, 2021,” the document reads. Privacy breaches were found to have occurred involving the use of email addresses that had been improperly collected without consent through Isitt’s access to council emails.

The City of Victoria has already acknowledged the existence of a privacy breach involving Isitt’s non-consensual publishing of the personal information of a multiple sclerosis advocate during a twitter dispute in early 2021 after she criticized Isitt’s dual participation in a meeting of Victoria council’s Committee of the Whole while Isitt was also overseeing a delivery at the Red Cedar Café Community Care Kiosk in Beacon Hill Park. Isitt later revealed to the public that he had founded the Red Cedar Café non-profit earlier in the pandemic but had avoided public association with Red Cedar for fear of politicizing its services, which were funded in part by substantial amounts of public money. However, the 2021 Red Cedar incident is not the same Red Cedar incident referenced in this newly obtained document.

The letter references the “2020 Red Cedar Café” email incident in the third of seven recommendations proposed to prevent future privacy breaches under “FOIPPA,” the Freedom of Information and Protection of Privacy Act:

“3. That Councillor Isitt no longer disseminate emails that are not about his work as a councillor with the City of Victoria. For example, the 2020 Red Cedar Café and the December 14th electioneering email did not comply with FOIPPA even if the correct consent was obtained by all recipients.”

While the City has not confirmed the precise date upon which the email that caused the newly confirmed privacy breach was sent, CFAX 1070 has obtained an email sent by Isitt May 4, 2020 in which Isitt advises the recipient that he is “volunteering” with a new non-profit. The email solicits recipients for financial donations that can be sent by e-transfer or by cheque to Red Cedar Cafe's initial 2020 location on Johnson Street, but it also includes Isitt’s physical mailing address at Victoria City Hall. 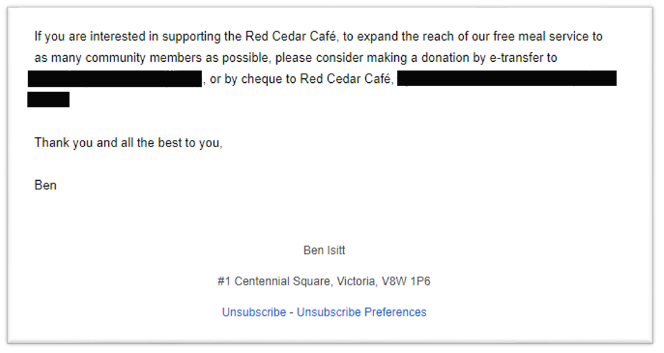 Isitt has not responded to requests for comment to confirm the May 4, 2020 email was the specific 2020 Red Cedar Cafe email referenced in the new recommendations being made by the City, or whether the breach was caused by the distribution of a different 2020 email involving Red Cedar Cafe.

CFAX 1070 contacted the Office of the Information and Privacy Commissioner for British Columbia to seek comment on the contents of the story published January 13, 2022 but CFAX 1070 was advised at that time that the commissioner was “not in a position to speak to the specifics of this case as he is not able to discuss active or potential files before the office.”

However, the commissioner’s office did advise at that time that when a privacy breach occurs, organizations are generally advised to follow four key steps:

It was previously reported January 13, 2022 that new recommendations were forthcoming from the City of Victoria that would “go much further than previous recommendations” issued following previous breaches involving Isitt’s email practices.

I am contacting you with regard to the collection, use and disclosure of your personal email addresses to provide you with information from time to time regarding City activities.  Your email address will be used for no other purpose and will be protected from unauthorized access in accordance with section 30 of the Freedom of Information and Protection of Privacy Act. You may unsubscribe at any time if you provide consent.

If the Mayor or a Councillor wish to continue corresponding with you on other city issues they must receive your written consent in the prescribed format that complies with FOIPPA.  A consent request must include the purpose for collecting your email address and how long the consent will be valid. If you consent, your email address must be protected from unauthorized use, disclosure or access and will not be used for purposes other than the purpose you consented to. You may, at any time, unsubscribe from further correspondence or contact the Mayor or Councillor(s) and withdraw your consent.”

The January 14, 2022 letter indicates that recommendation seven (above) has already been implemented, which is consistent with the recent appearance of new text on the City of Victoria’s contact page on the City website.

Archived versions of the City’s website captured earlier in July of 2021 do not contain that text. 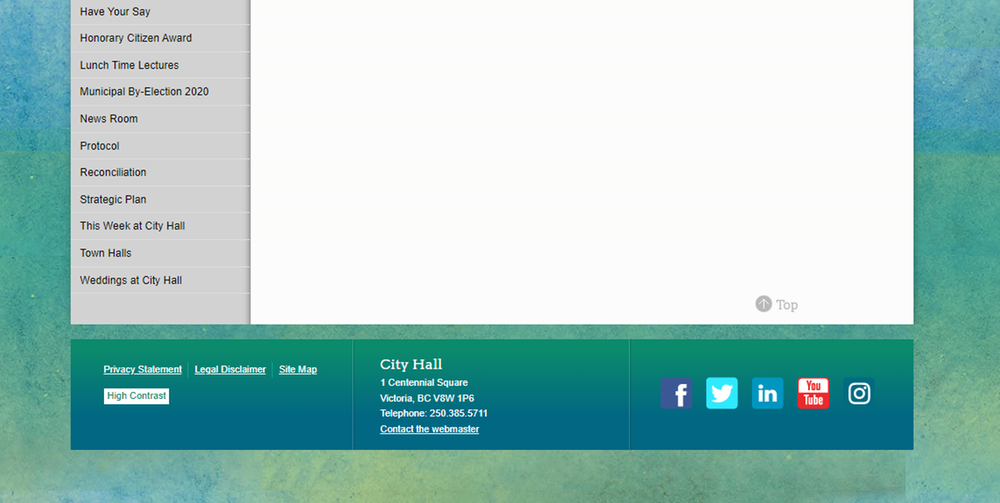 Isitt has not responded to CFAX 1070’s repeated requests for comment regarding the recommendations, but he did advise on January 7, 2022 before he was aware of the outcome of the most recent investigation that the November 17th and December 14th 2021 email complaints related to an error he had made in 2016. Isitt advised at the time “I have been working to resolve the issue and do not anticipate further problems going forward.”