Statistics Canada recently updated the City of Victoria’s Crime Severity Index rating for 2020, adding context to a pandemic in which many members of the public reported an increase in crime and public disorder. According to Canada’s national statistics agency, Victoria’s CSI rose sharply in 2020 to a value of 168, towering well above neighboring municipalities Oak Bay (30), Esquimalt (39), and Saanich(47).

Victoria Police Spokesperson Cst. Cam MacIntyre told CTV’s Rob Buffam that more than 50% of all priority one and priority two calls for police response in 2020 were dispatched to either 24/7 camping parks like Beacon Hill Park, or to areas around multi-until temporary residential housing facilities repurposed by the government from hotels.

It’s been one full year since threats and violence erupted in Beacon Hill, prompting City of Victoria employees to refuse unsafe work. Now, confidential documents produced by the City of Victoria last September – and obtained by CFAX 1070 – offer a glimpse into what working conditions were like in Victoria’s parks as Victoria’s Crime Severity Index surged.

The document bears the City of Victoria’s logo and is labelled “HAZARD IDENTIFICATION, ASSESSMENT AND CONTROL WORKSHEET.” It was distributed initially in paper form only, after previous electronic versions of safety documents were obtained by CFAX 1070 and became the subject of reporting.

The booklet identifies various hazards and assesses them on a scale of one to three for their severity, probability, and frequency. 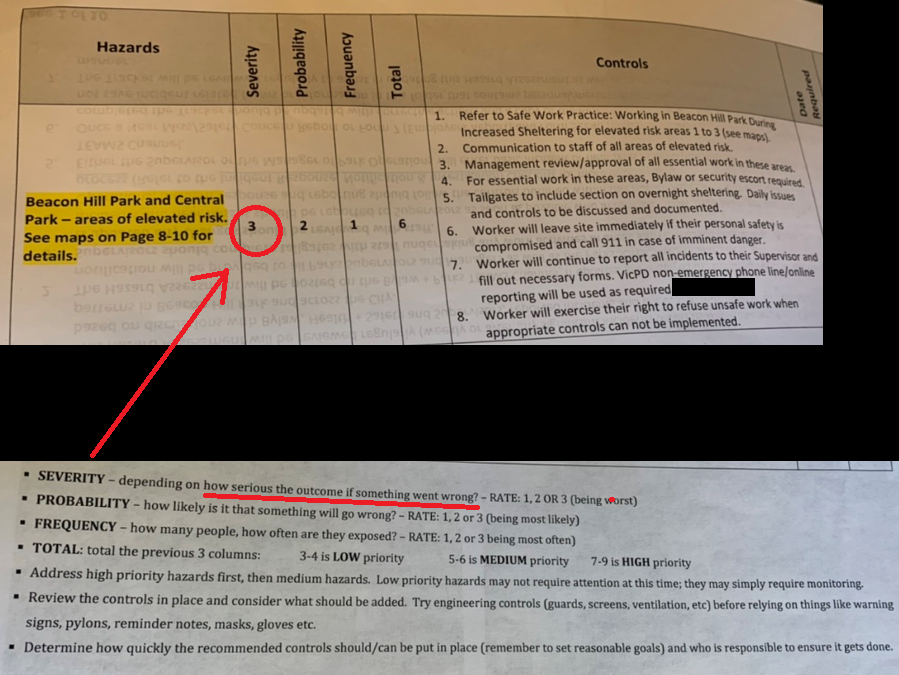 The worksheet identifies Beacon Hill Park and Central Park as being hazards with the maximum possible severity rating of (3/3), probability (2/3), and a lower frequency rating of only (1/3). The total hazard rating listed as of Sept 2020 is (6/9). The reader is told “For essential work in these areas, Bylaw or security escort required.”

The document has a separate section for violence and aggression in general, increases of which the document states are potentially caused by an increase in people sheltering in parks. The document states the severity (3/3), probability (2/3), and frequency(2/3), combine to a score of (7/9), or “HIGH.”

Paragraph 11 of this section tells the reader that as of September 1st, 2020 “Horticulture staff have been moved to the Parks Administration building until a security assessment can be completed of the Service Building.” The public was not made aware of any buildings being evacuated due to the security concerns associated with sheltering in parks during the pandemic at the time. 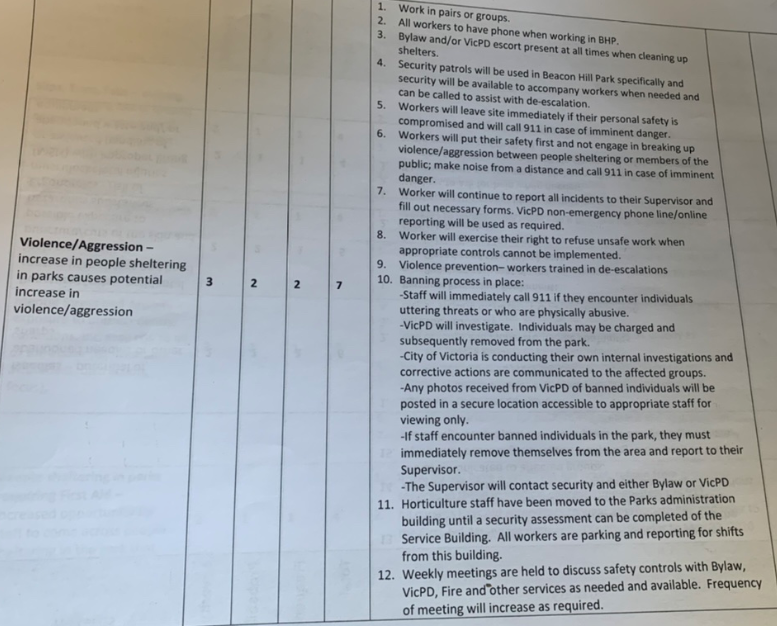 The document also shows the public for the first time some elements of the secret process created by the City of Victoria to ban individuals from the parks system altogether. Photographs of banned individuals were kept in a secure location intended for approporate staff to view only. Staff were advised to immediately leave an area and report the situation to a supervisor if a banned individual was spotted in a park.

Attached to the final pages of the worksheet are maps overlaid with blue so-called “ERA”s or Areas of Elevated Risk. 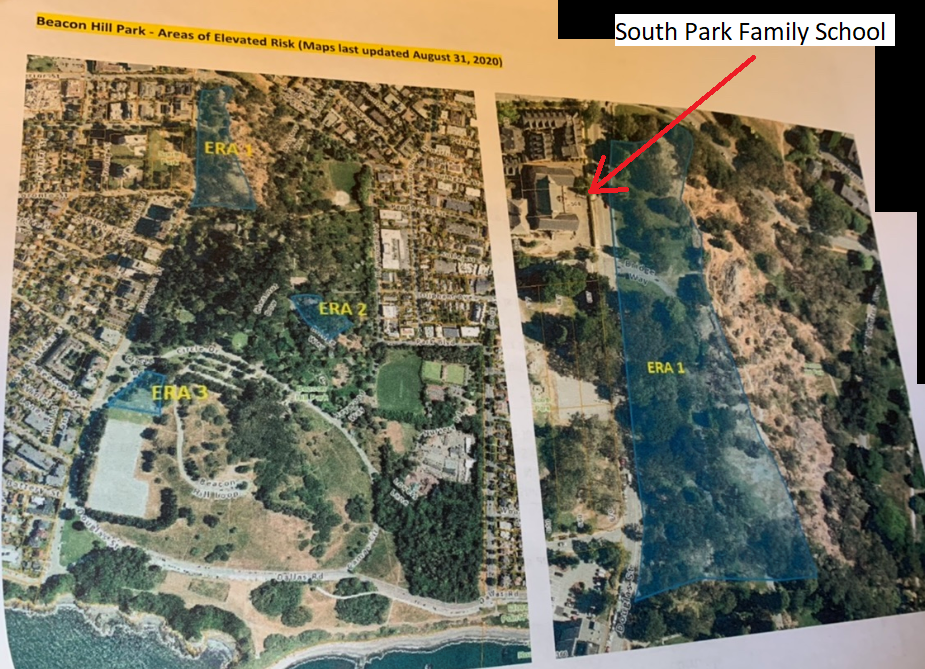 The number and location of Areas of Elevated Risk fluctuated during the pandemic and were modified on the basis of continnual reassessment by City of Victoria Bylaw staff and City of Victoria Management.

As of September 1st, 2020, four Areas of Elevated Risk are listed.

In its response, a City of Victoria spokesperson says "due to the increase in sheltering in parks and the potential for increased safety risks, the City reviewed risks among all park areas staff work in. The hazard identification, assessment and control worksheet is the result of collaborative work done by staff, management and the union. This also included a number of safety upgrades to the Parks Service Building."