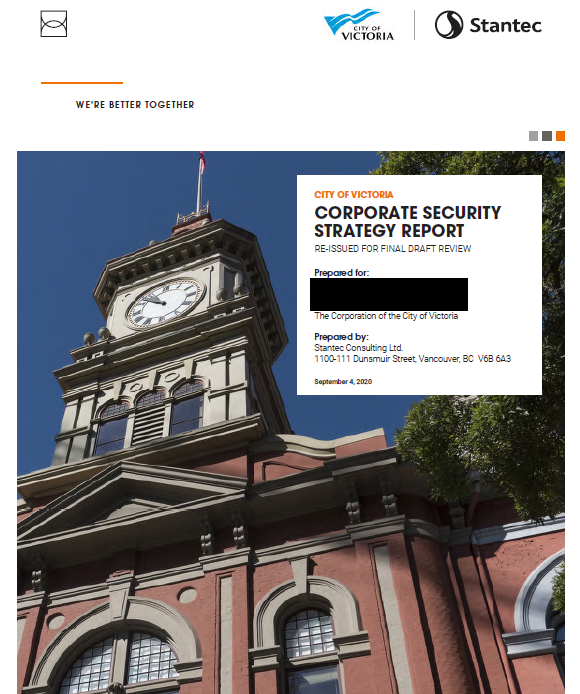 “…this continues to expose the public to undue risk of harm and may cause erosion of public trust and damage the City’s reputation.” – Stantec City of Victoria Corporate Security Strategy draft report, Sept 4, 2020.

As early as September 2020, the City of Victoria was warned in a consultant’s draft report that a lack of panic alarms in city-controlled spaces such as Centennial Square and Beacon Hill Park put both city staff and members of the public at risk.

CFAX 1070 has previously reported exclusive details of the City of Victoria’s Hazard Risk Identification Assessment worksheet system that was developed in partnership with CUPE Local 50 and the Victoria Police Department, after a number of dangerous incidents involving city of Victoria staff and individuals sheltering in Beacon Hill Park and other city controlled spaces. 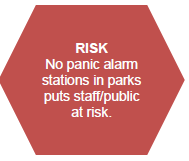 A draft version of a corporate security strategy report prepared by Stantec Consulting Ltd. for the City of Victoria approximately one year ago – and exclusively obtained by CFAX 1070 – details the city’s awareness at that time of gaps in its security apparatus that the report found risked the safety of city staff, members of the public, and the city’s reputation. 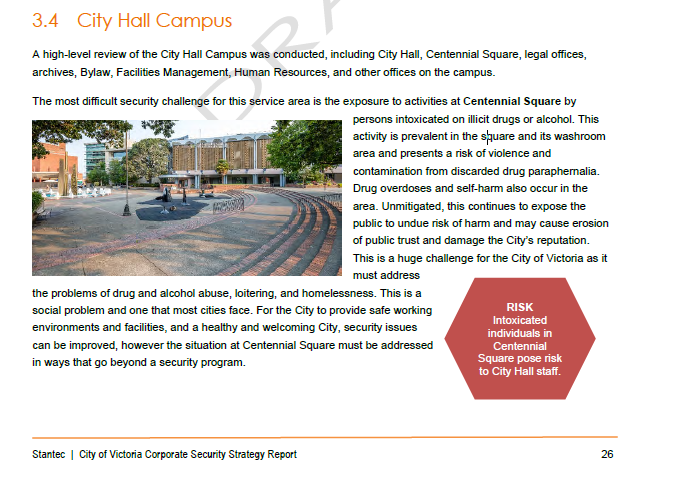 The report goes to great lengths to emphasize the costs of a negative incident that extend not only to potential injury and loss of property, but also damage to the city’s reputation, a theme that is repeated number of times throughout the document. 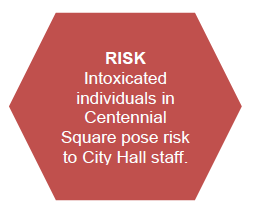 “There are currently no panic alarm stations in public areas like the Parkades and in Centennial Square. The City should consider providing this service in areas where potential exposure to risk is reasonably expected.” – Stantec City of Victoria Corporate Security Strategy draft report, Sept 4, 2020.

Of all locations in what the report calls “City Hall Campus,” Centennial Square is identified as presenting the most difficult challenge for maintaining security. The report warns that behaviors exhibited by persons in the square under the influence of drugs or alcohol expose the public to undue risk of harm.

“These observations were also noted in previous reports commissioned by the City… This exposes City staff and members of the public that transact business in City Hall or use the facilities to risk of violence or contamination…” – Stantec City of Victoria Corporate Security Strategy draft report, Sept 4, 2020. 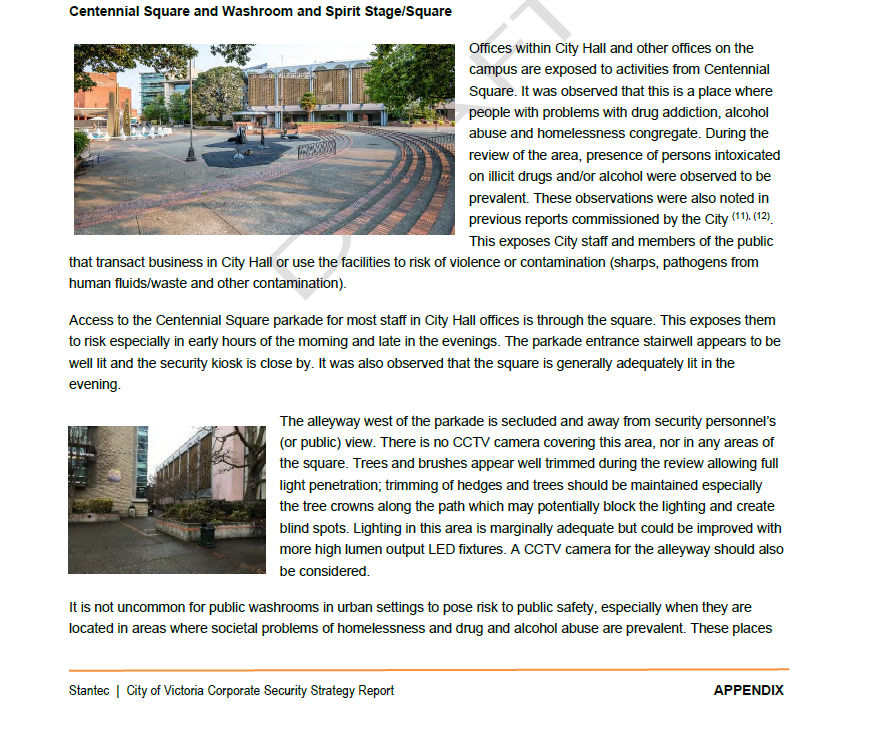 “The current situation in the square is an example, among other areas in the City, of the challenges the City must face to provide a “Safe Working Environment and Facilities” and “Health, Well-Being and Welcoming City” for its citizens and visitors. Unmitigated, this continues to expose the public to undue risk of harm, injury or damage and may cause erosion of public trust and damage the City’s reputation” – Stantec City of Victoria Corporate Security Strategy draft report, Sept 4, 2020. 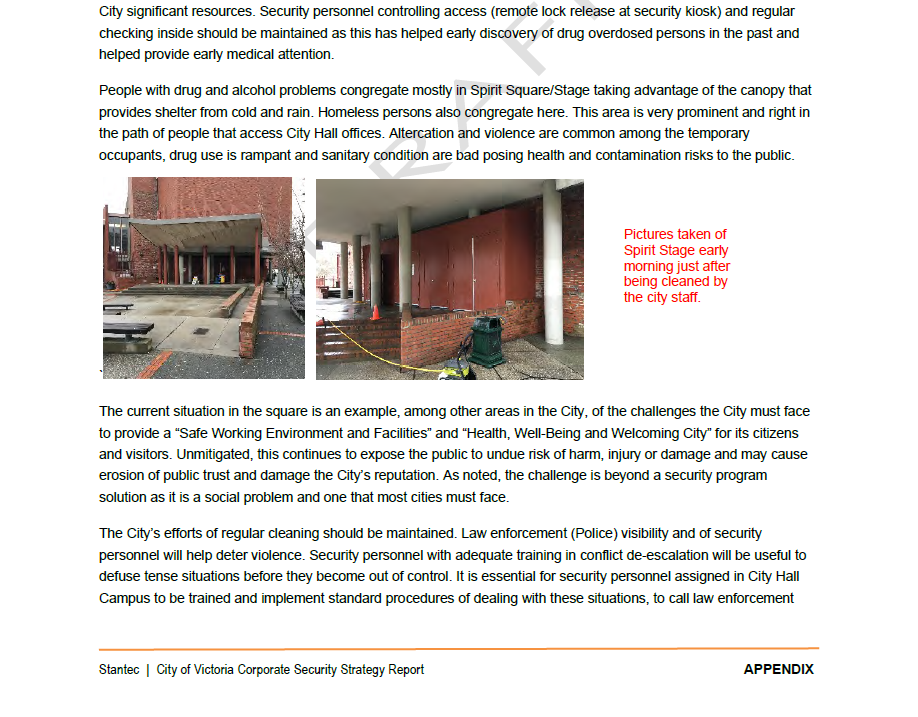 The City of Victoria owns and controls five parkades largely situated in the downtown core. The Closed Circuit Television Camera (CCTV) systems in the city’s parkades have been found to be insufficient.

“The parkade CCTV systems deployed in three out of the five parkades do not provide adequate coverage to deter criminal activity or capture adequate images to aid law enforcement in identification of perpetrators to support prosecution,” the report states on page 23.

“Of the parkades that have CCTV coverage, none have captured images that could be used to assist law enforcement, nor is it known of any successful prosecutions or of any recovered stolen property. This may be perceived as negligence on the part of the City, resulting in a negative effect on the City’s reputation and potential exposure to liability.” – Stantec City of Victoria Corporate Security Strategy draft report, Sept 4, 2020.

The report reminds the reader that there have been recorded cases of self-harm in the parkades that could have been prevented with different security practices and better CCTV coverage.

However, the Stantec report acknowledges in its conclusion that some of the recommendations might encounter tension with existing city policies, specifically the Corporate Privacy Policy of City of Victoria as adopted April 13, 2018, and how it relates to CCTV cameras.

“Although it is acknowledged that some of the recommendations presented in this report may have potential conflict with existing policies in effect, most notably the Corporate Privacy Policy of the City pertaining to collection of personal information relevant to CCTV cameras in public places, there needs to be a balance of an individual’s right to privacy and the need to ensure the safety and security of City employees and its assets as demonstrated in the city parkade situation.” – Stantec City of Victoria Corporate Security Strategy draft report, Sept 4, 2020.

Previous reporting by CFAX 1070 has revealed the existence of Areas of Elavated Risk in Beacon Hill Park and elsewhere that were known to City of Victoria staff, but never revealed by the city to members of the public who may have been put at risk. Instead, the City of Victoria instructed its staff in Beacon Hill Park and elsewhere “do not engage in breaking up violence/aggression between people sheltering or members of the public; make noise from a distance and call 911 in case of imminent danger.”

As of August 31, 2020 (days before the date of the Stantec draft report discussed in this editorial), Elevated Risk Area 2 was described as the area immediately around the public washrooms and Beacon Hill Service Building, adjacent to the (closed to vehicle traffic due to covid-19) Bridge Way. At that time, all horticulture staff had been moved out of the Service building and were instead working in the administration building.

The Service Building referenced above is located in ERA 2, as defined by the City of Victoria as of August 31, 2020. 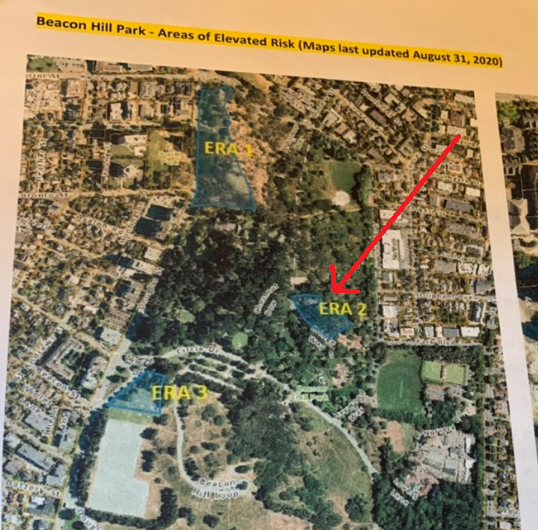 The structures in question are near the playground and public washrooms adjacent to Bridge Way. 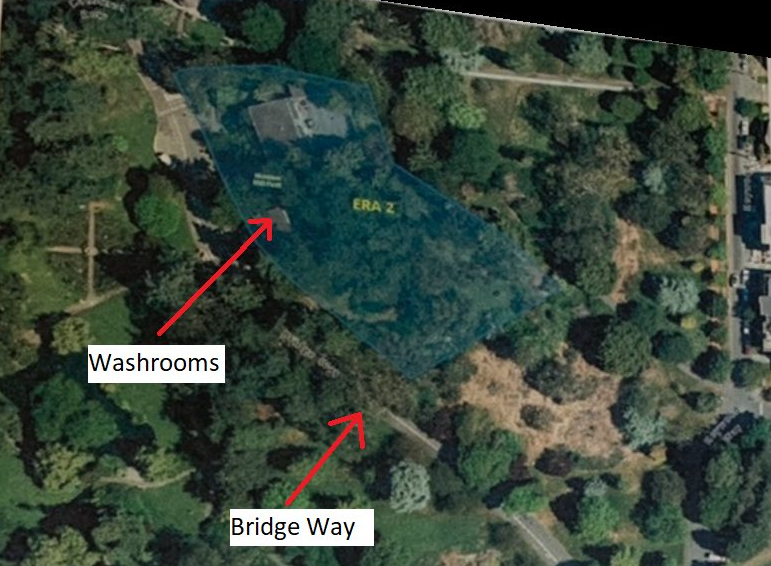 The removal of horticulture staff from the Beacon Hill Service Building was first revealed to CFAX 1070 the week of July 21, 2020, by a City of Victoria official not authorized to speak about the matter who described a harrowing situation involving threats made to City of Victoria staff members.

At the time, the city official told CFAX 1070 that “concerns here are for safety of workers and park users quite obviously with parks staff not being around on their regular duties, as well as the safety of sheltering community the longer the City keeps this information to themselves…”

CFAX 1070 reported on the matter exclusively the morning of Friday, July 24, 2020. News of the incident spread quickly after that. It was reported by CTV Vancouver Island, CHEK News, the Victoria Times Colonist, Black Press, and others.

The incident and subsequent refusal of unsafe work were reported so widely that they resulted in a statement made by the Premier of British Columbia John Horgan at a press conference July 27, 2020. Premier Horgan told reporters “There is a bylaw in place that says you can’t camp during the day… You have to fold up your camp in the morning. Victoria has chosen not to enforce that because they believe that in a pandemic, that would be ill-advised. I disagree with that, but that’s not my responsibility.”

The Stantec security Sept 4, 2020 report makes a number of troubling findings with respect to how much risk there still was to members of the public within Beacon Hill Park months later. The report recommends the installation of “Public panic stations,” to allow members of the public to call for help in the event of a violent incident or medical emergency.

“Public panic stations as described in Section 2.2.1 should be considered. These systems will require significant investment but will greatly improve security and confidence in the public.” -- Stantec City of Victoria Draft Corporate Security Strategy report, Sept 4, 2020.

When reached by CFAX 1070 to provide comment, a representative of Stantec Consulting Ltd. said “Due to our contractual agreement, we can’t speak to this specific report,” directing further inquiries to the City of Victoria.

The report which is dated Sept 4, 2020 cautions: "The material in it reflects Stantec’s professional judgment in light of the scope, schedule and other limitations stated in the document and in the contract between Stantec and the Client. The opinions in the document are based on conditions and information existing at the time the document was published and do not take into account any subsequent changes."

CFAX 1070 submitted a detailed request for comment to the City of Victoria with respect to more than a dozen elements of the Stantec draft report, inquiring as to the status of each.

City of Victoria Head of Engagement Bill Eisenhauer responded by stating: “I can confirm that the City contracted Stantec to assist with a review of the City's operational programs and areas for improvement specific to security.  The work on this review started in 2020 and continued into 2021, and the information will be used to inform policies and procedures relating to the security of workspaces and public facilities.  With respect to the safety of visitors and staff working in parks and City facilities, the organization has taken steps to address safety concerns and will continue to evaluate new opportunities with the goal of ensuring these spaces are welcoming to all.  Although some of these improvements may include City infrastructure, equipment or security patrols, others relate to operational adjustments which are less visible.”

While the city states that steps have been taken to address a number of the safety concerns in the report since it was written one year ago, the specific steps taken have not been publicly revealed at this time.