EXCLUSIVE PHOTO: In a dimly-lit area, off-limits to most members of the public at the City of Victoria, a padlocked cabinet hangs on an unfinished wall.

Within the cabinet is stored a portrait of the City’s namesake: Her Majesty Queen Victoria, whose 63-year reign between 1837 and 1901 saw the founding of Fort Victoria, the creation of the Dominion of Canada, and the dawn of the 20th Century. 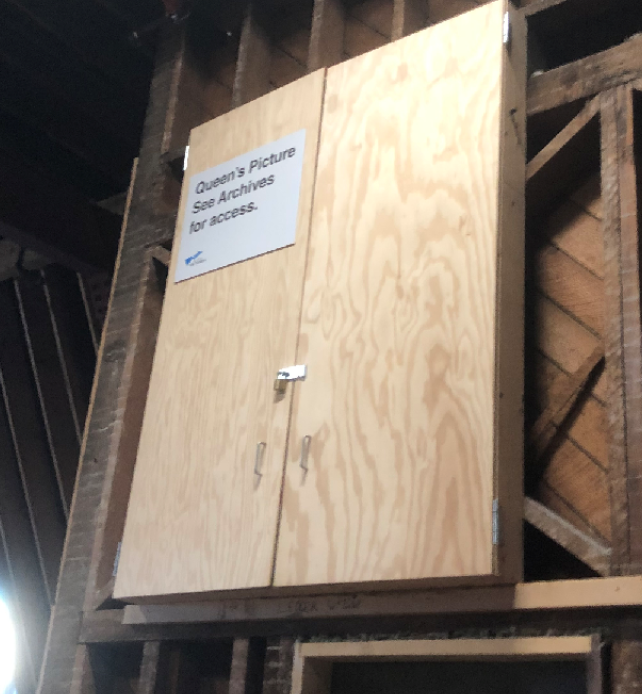 “Queen’s Picture,” a plain sign attached to the cabinet reads. “See Archives for access,” with a City of Victoria logo visible in the bottom left corner.

City Hall’s relationship with Canada’s monarchy has been a complicated one in recent years. Mayor Lisa Helps and four members of council declined to swear allegiance to Queen Victoria’s great-granddaughter Queen Elizabeth II while being sworn into office in 2014. (Note: a previous version of this editorial incorrectly stated grand-daughter).

“No other local government in the Capital Region swears an oath of allegiance to the Queen, so it was nothing odd. It was picked up and turned into a big deal for no reason,” Helps would tell CFAX 1070 years later, maintaining that she was not anti-monarchy.

Nevertheless, the future of the portrait in the cabinet depicted in the exclusive photograph above is uncertain.

“The crate to which you are referring in the attached photo contains a painting of Queen Victoria that was placed in storage last year,” City of Victoria Head of Engagement Bill Eisenhauer said when reached for comment regarding the exclusive photo obtained by CFAX 1070.

“The City is still determining where the painting may be hung in the future,” Eisenhauer said, noting the official portrait of Her Majesty Queen Elizabeth II remains hanging in council chambers.

The quiet removal of the portrait of Queen Victoria by the City of Victoria last year is one of a number of moves over recent years to remove symbols of Victoria’s colonial past from public display. While the removal of the portrait of Queen Victoria went largely unnoticed by members of the public due to covid-19, previous removals of colonial symbols of the City’s history have attracted significantly more attention.

In 2018, Victoria made national headlines for announcing the removal of the statue of Sir John A. Macdonald outside City Hall with less than one week's notice, leaving little time for public debate. 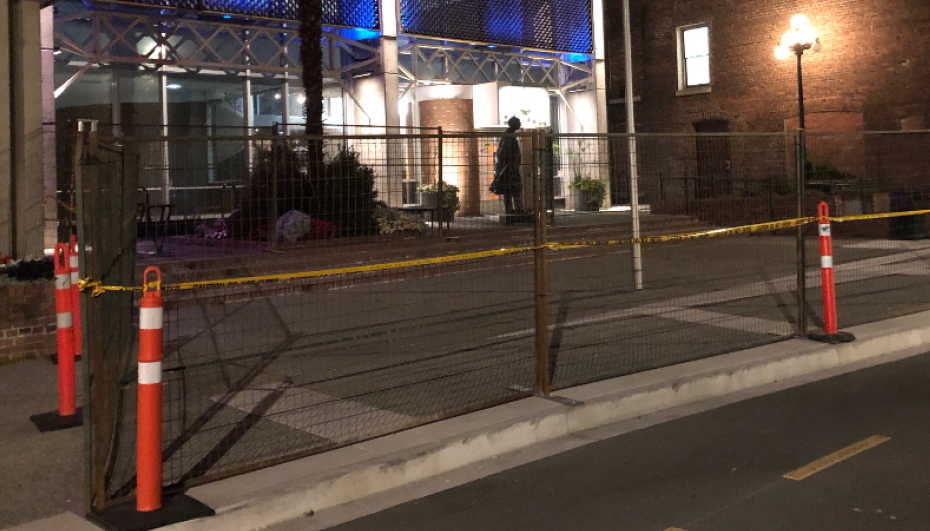 (Above: Sir John A. Macdonald statue outside Victoria City Hall, Aug 10, 2018, the night before removal)

The timing was deliberate, as a member of the City Family would later explain. Anticipating a long, acrimonious debate over whether the statue should be removed, the choice was made instead to “rip-off the bandaid” as Janice Simcoe told CFAX-1070 later in August 2018 and remove the statue before public opposition had time to coalesce.

With the controversial step of removing the statue accomplished, the expectation was that a process could then occur during which the statue would be “recontextualized,” to better reflect the darker elements of Canada’s history, including the role of Sir John A. Macdonald regarding Canada’s Indian Residential School program, which has been the subject of renewed public scrutiny following the announcement of preliminary findings of more than 200 unmarked graves at the site of the former Kamloops Indian Residential School in May, 2021.

Not unlike the portrait of Her Majesty Queen Victoria, the statue of Sir John A. Macdonald currently resides in a crate at a City of Victoria facility.

The presence of statuary depicting other colonial figures has also been debated at the Victoria council table. In October 2020, Councillor Ben Isitt posed questions to staff regarding a potential process to remove the statue in Victoria’s inner harbour of Captain James Cook. After citing what Isitt called the “offensive” nature of a likeness of James Cook to some community groups, Isitt was advised by staff that this particular work of art was not in the City of Victoria’s collection, and instead was on land controlled by the Greater Victoria Harbour Authority (Click for Audio). This effectively ended the debate.

Nevertheless, Captain James Cook’s days atop the pedestal in the inner harbour were still numbered…

While official processes have been determining the future of some works of public art showcasing symbols of Victoria’s colonial past, other similar works in the Victoria area were removed or defaced through unlawful means in a number of high-profile incidents in 2021. 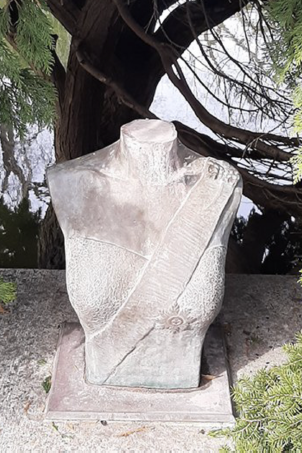 In February 2021, persons unknown cut the head off a statue of Queen Elizabeth II (the great-granddaughter of Queen Victoria and Canada’s current reigning monarch) near the Children’s Farm in Beacon Hill Park.

Victoria police appealed for witnesses to come forward in relation to the missing head, but the department was met with criticism by Councillor Sarah Potts for using the term “beheaded,” to describe what happened to the statue. Councillor Potts contended “the violent language used heightens the narrative of unhoused people as inherently criminal and dangerous.”

The head was never found.

In June 2021, a group of protesters used red paint to deface a statue of Queen Victoria located on the grounds of the BC Legislature near Victoria’s inner harbour. The incident drew concern from representatives of the Lekwungen-speaking peoples for invoking their name while failing to follow the proper protocols and engage respectfully on their traditional lands. “Without our permission or knowledge, this act of aggression and insult has crossed boundaries and a significant error of judgement has now led to serious misconception as to who may have written ­’Lekwungen’ on the statue,” stated a commentary authored by the chiefs of the Esquimalt and Songhees Nations and published in the Times Colonist June 15, 2021.

On July 1, 2021 a large group of individuals converged on the statue of Captain James Cook located in Victoria’s inner harbour, after which the statue was torn from its pedestal and cast into the water. Less than one year after being the subject of debate respecting potentially “offensive” works of art at the Victoria council table, the Cook statue was torn-down, beheaded, and thrown into the harbour amid cheers and drumming. 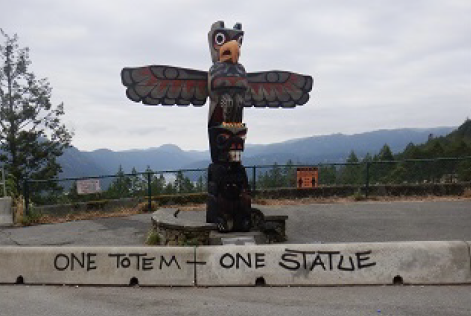 The fallout from the incident involving the Captain Cook statue was widely felt. A totem pole located near the summit of the Malahat was lit on fire as a possible act of retaliation. A cement barrier adjacent to the burned totem was found with a spray painted message reading “One Totem – One Statue.” The persons responsible for burning the totem never publicly came forward and RCMP are still seeking information regarding the matter.

On July 9, 2021, chiefs from nine Indigenous nations across south Vancouver Island issued a joint statement calling for peace. This show of solidarity with other political leaders from across much of the Victoria area preceded an easing of tensions. No other Victoria-area statues were pulled down or totems burned.

Delayed to some degree by the Covid-19 pandemic, the official process to recontextualize the statue of Sir John A. Macdonald has been underway for the last 45 months, with the fifth in a series of “Reconciliation Dialogues” held May 30th, 2022.

“Guided by members of the City Family and special guests, the conversations seek to build the community’s knowledge and understanding of reconciliation -- what it is, why it is needed, and why community participation in reconciliation is important,” the City of Victoria’s website reads, describing the sessions.

The final dialogues are scheduled to take place July 11th and September 12th, 2022.

The description of the final Sept 12, 2022 dialogue on the City of Victoria’s website reads as follows:

“In this Dialogue, the City Family will present a Reconciliation Plan to the City and the community to carry on the work of reconciliation for decades to come. Participants will be asked to make a reconciliation commitment of their own,”

This dialogue will set the stage for the 2022 municipal election, which is scheduled to take place 33 days later.

Councillor and Mayoral Candidate Marianne Alto is the only member of the City Family who has declared an intent to seek the mayor’s chair at this time.

Councillor Ben Isitt is listed as a member of the City Family and has not ruled out seeking election for the mayor’s chair, but his intentions are not clear. Isitt has already run twice unsuccessfully for mayor in 2002 and 2005, so 2022 would be his third attempt if he formally enters the race.

Councillor and Mayoral Candidate Stephen Andrew is not a member of the City Family. Andrew unsuccessfully ran for mayor in 2014, and 2022 will be his second attempt.

The task of mending divides in the community and balancing the sensitive issues surrounding statues, portraits, and other symbols of Victoria’s colonial history will ultimately be the task of whoever wins on October 15, 2022.