UPDATE: Speeding car manages to jump over Highway 20 in Dorval

Did a speeding car manage to jump all six lanes of Highway 20 in Dorval during the evening rush hour on Monday?

“I was going west on the 20 in the left lane. Out of the corner of my left eye I caught a light reflection,” Matthew Berube told CJAD 800.

What happened next sounds like a scene out of the Dukes of Hazard.

“I look over and there is a car airborne. I watched it clear all four lanes of rush-hour traffic, land nose-first in the ditch on the Cardinal side of the 20. It then rolled end-over-end, rolling over the first two sets of train tracks, then landed on its roof in the middle of all four sets of tracks.”

Berube said traffic immediately came to a halt. He and two truckers got out of their vehicles and ran over to check on the driver.

Other witnesses told a similar tale on social media, noting the sedan  had been speeding northbound on Neptune Blvd. just moments before the spectacular crash.

Berube said when police arrived at the scene they did not initially believe his story, but he said he knows what he saw.

“I watched it fly from the eastbound side all the way over the west side.” 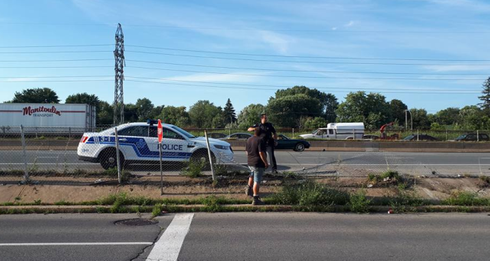 Investigators are trying to determine if the incident is linked to a second crash on Hymus Blvd. near Andre.

A stolen car slammed into a tractor trailer at about 7:30 P.M. The driver was killed.