A Taylor Swift song that is possibly about her ex Joe Jonas got a thumbs up Wednesday from Jonas’ wife, actress Sophie Turner.

“It’s not NOT a bop,” Turner wrote in an Instagram Story over a clip of Swift’s “Mr. Perfectly Fine.”

Swift reposted Turner’s Story and wrote “Forever bending the knee for the [Queen] of the North” – a reference to Turner’s character on Game of Thrones.

Swift wrote the song in 2008 – the same year she dated Jonas – and recorded it for Fearless (Taylor’s Version), the re-recorded version of her sophomore album. The pop star has not confirmed that “Mr. Perfectly Fine” is about Jonas but fans were quick to make the connection.

“Hello, Mr. Perfectly fine / How’s your heart after breaking mine? / Mr. always at the right place at the right time, baby,” Swift sings. “Hello, Mr. casually cruel / Mr. everything revolves around you / I’ve been Miss misery since your goodbye / And you’re Mr. perfectly fine.”

Jonas married Turner in 2019 and they welcomed a daughter last July. 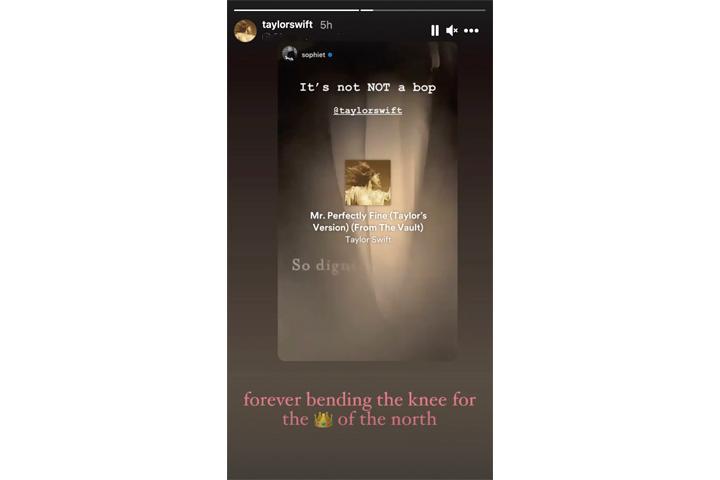