Montreal woman suing the city for $700,000 over violent arrest

Four years after Montreal police violently arrested her, breaking her arm above the elbow, Majiza Philip is taking her case to court.

“I’m here today because it’s happening more and more in Montreal,” Philip told reporters at a press conference at the Center for Research-Action on Race Relations (CRARR). The organization is assisting Philip in her case against the city.

“It’s happening more and more to minorities specifically,” she said. “Black people are being targeted and racially profiled by the police.”

In 2014, Philip was out for an evening in the Gay Village when police detailed one of her friends outside the Olympia Theatre. When she asked police why they had arrested her friend, two officers violently arrested her.

The broken arm she suffered during the incident required a metal plate and six screws. Her arm was in a cast for five weeks and she was unable to work.

A court ruled that the arrest was unwarranted and Philip was acquitted of all charges laid that night. Neither of the two officers has been reprimanded, and both are still active on the force, according to Philip’s lawyers. 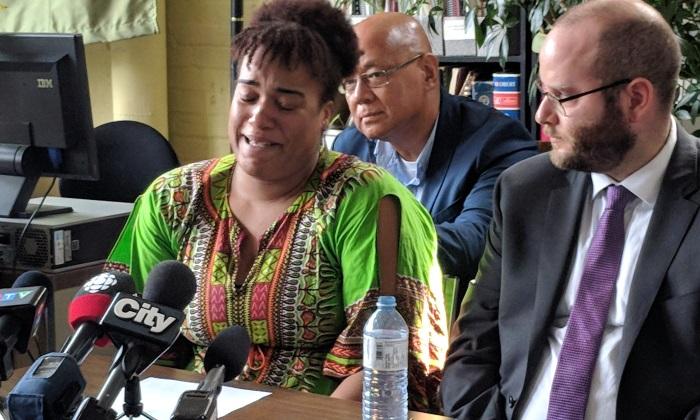 “It still affects me every day,” Philip said, unable to hold back tears. “I just want some justice, basically, and I’m mad.”

The dollar amount has been set intentionally high in order to send a message to the city that repeated behaviour like this from the police should come with serious consequences.

“Punitive damages are supposed to serve not only as a punishment function, but more importantly a dissuasive function,” said Max Silverman, the lawyer representing Philip in her lawsuit.

“Every decision up until now,” he said, “every quantum of punitive damages awarded has not stopped this sort of event from happening.”