Right Foot: Not the math you think it is

Welcome to the Right Foot, a segment we do on CJAD 800's Andrew Carter Morning Show to help you start your day with a smile and get you off on, well, the right foot.

It's not quite on the same level as a dress that changes colour depending on who's looking at it, but this brain teaser left programmers on Reddit trying to calculate the incalculable.

The caption attached to the photo says that the problem can be solved be pre-school kids in five to ten minutes but programmers will take an hour to get it. 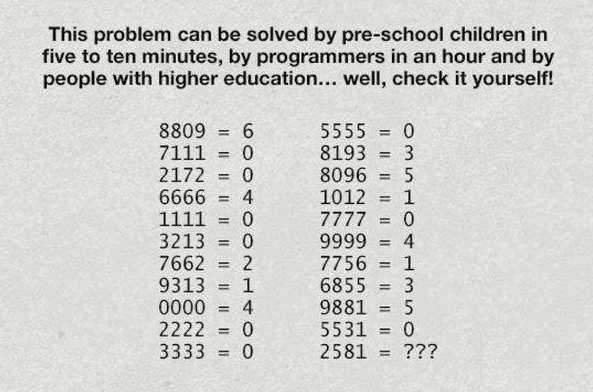 Unfortunately for that Redditer, their efforts were in vein, as the answer has absolutely nothing to do with mathematics at all and is based entirely on circles.

Yep, all you have to do is count the number of circles included in each four digit number.

Have you ever noticed a sports game in the background of a movie or TV show and wondered what game they are watching? Well, meet noproblemgambler, a TikTok user who spends more time than any human likely should tracking down the answer to that stupid question.

In his latest episode the gambler is tasked with finding the baseball game being shown on a TV in a 2008 episode of the US version of The Office.