By the Canadian Press

MONTREAL -- The Canadian Armed Forces’ Snowbird jets continued their tour of Canada in Quebec on Thursday, with stops in Quebec City and Montreal.

The nine-jet formation has been zigzagging through the skies in hopes of boosting the country’s morale as it continues to fight against the COVID-19 pandemic.

After darting through the New Brunswick and Prince Edward Island skies on Wednesday, the Snowbirds flew through the Bas-Saint-Laurent region and onto Rimouski. They travelled along the Saint-Lawrence River in the Témiscouata region to Rivière-du-Loup, before landing in Saguenay for the night.

On Thursday, the jets left the Canadian Armed Forces base in Bagotville at 9:30 a.m. to head to Saint-Siméon in Charlevoix. They then followed the north banks of the river to Quebec City, where they landed at the Jean-Lesage International Airport around 10:30 a.m. 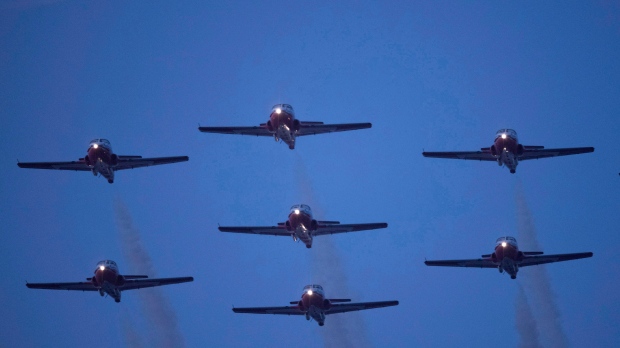 The jets took off from Quebec City at 12:45 p.m. to fly above the river, over to Trois-Rivières. They then headed south, so their signature white smoke trails could be seen by folks in Drummondville, Granby, and Saint-Jean-sur-Richelieu, before landing at the Montreal airport around 1:45 p.m.

At about 4:15 p.m., the Snowbirds will take off from Montreal to follow the river west to Cornwall, Ontario, before flying northwest for a scheduled landing in Ottawa at 5:15 p.m.

Lieutenant-General Al Meinzinger, a commander with the Royal Canadian Air Force, said that since Canadians can’t gather to attend air shows, the Snowbirds team will come to them as a tribute amid the pandemic.

This report by The Canadian Press was first published May 7, 2020.