The King was honoured by her court on Wednesday, as former host Melanie King was inducted into the CJAD 800 Wall of Fame alongside other past legends of the airwaves.

"Thank you, for all of that, that's very lovely," she said, appearing from her new home outside Sydney, Australia. "I'm very touched."

King arrived at CJAD 800 in 1981, after first spending a few years copywriting for CJFM and then completing a Masters in Journalism at Carleton University in Ottawa.

A Montreal native who grew up in St. Laurent, King knew being at CJAD 800 meant the big time, and made sure to hit the ground running.

She co-hosted the afternoons for several years before moving to mid-mornings, returning with a lifestyle magazine at 1 p.m. She also anchored a one-hour long-form interview programme in the evening for several years.

She was a ratings hit — to the point that, when her first son was born, CJAD 800 set up a broadcast line from her home so she could still do her show. It was a first at the time, and the ratings soared even higher. 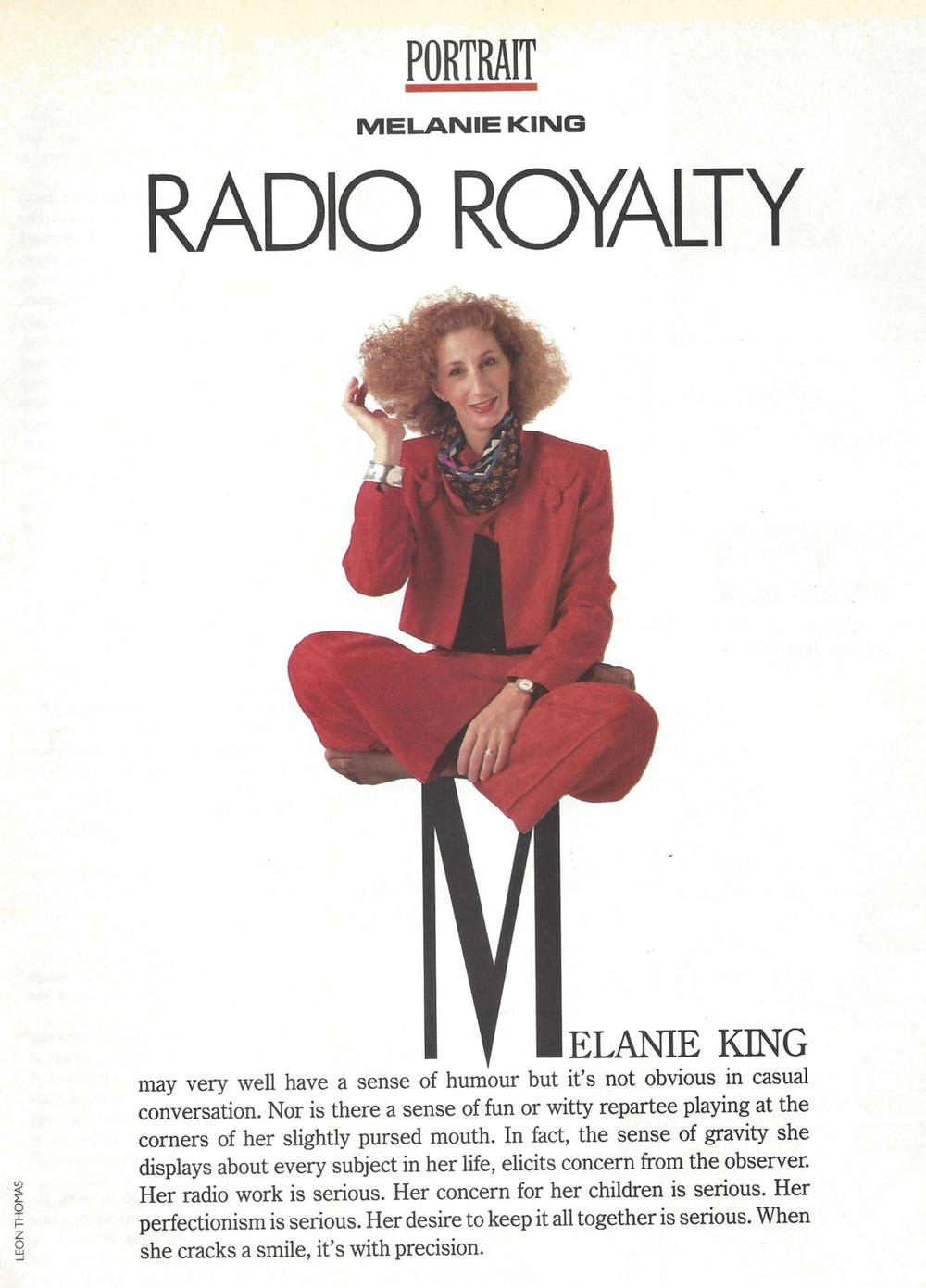 Her tenure at the station saw female voices branch out from only talking about the home and cooking; for King, nothing was off the table, and her show balanced the light with the heavy.

"We've talked everything from politics to abortion, from money to birds — you name it," she said.

A driven perfectionist, King didn't want to be known as a woman broadcaster, but a broadcaster that just happened to be a woman.

She told the Gazette in 1988 it was a difficult task: to be treated as an equal in a male-dominated field, where woman had to fight for permission to talk about things that weren't recipes or getting out carpet stains. 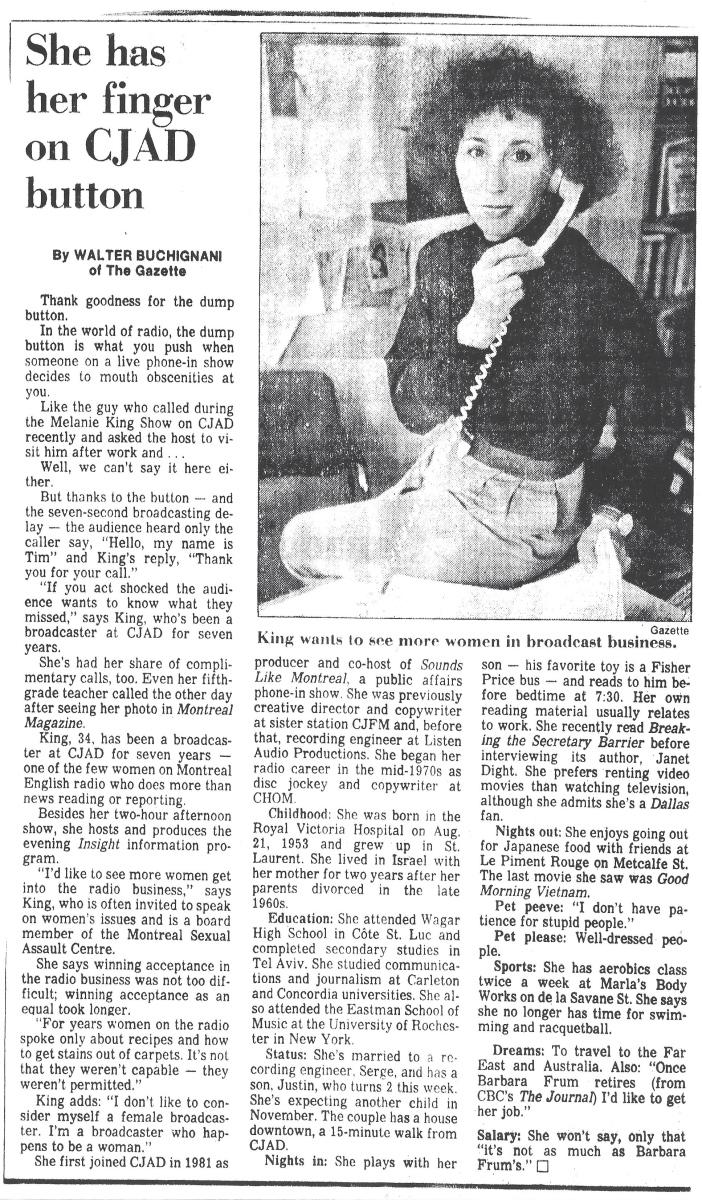 Longtime anchor and voice at CJAD 800 Trudie Mason says King made a habit of being versatile, thorough, and very, very good.

"Woman had been on radio for a long time before Melanie landed at CJAD [800] but they weren't doing everything," she said. "it wasn't really accepted for a woman to do hard political analysis for example, or really hard-hitting interviews, and I think, Melanie, when she landed that key morning talk show, really brought that skill to the fore, and she showed, 'yeah, she could do — women can do — hard-hitting political analysis,'".

"Not only could she pull off high-level political interviews and commentary with panache, but she could also go from talking from the latest fashion trends to the latest farm releases, medical thigns, she was a jack of all trades, she was a triple threat on that morning talk show," she said.

"Melanie had to fight to get to where she got, and she was strong, and intelligent and compassionate at the same time," he recalled. "She was quite a remarkable woman [to work with]."

Over the years, King interviewed several heads of state, including Canada's as-of-yet only female prime minister.

Beyond Kim Campbell and Brian Mulroney, she also sat down with other Canadian royalty, like Margaret Trudeau. She was also on the air when people needed answers during major stories, like the St. Amable tire fire and the Polytechnique massacre.

When King decided to pack it in and move to Australia after 15 years, the announcement made the front page. 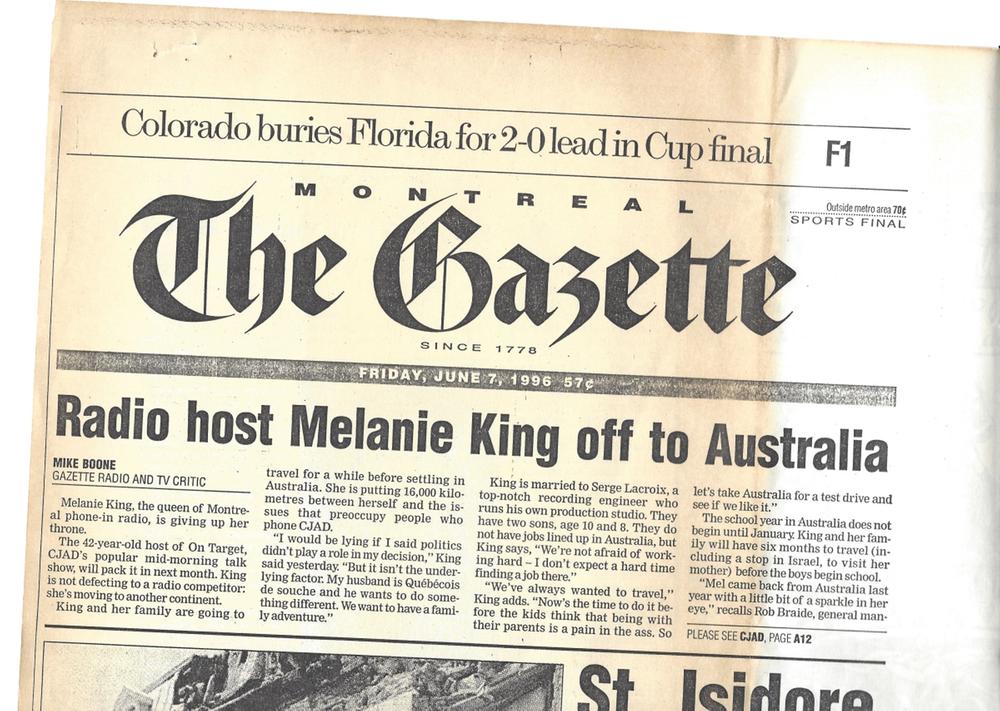 The family was looking for new adventures, she said at the time, but it was also a tumultuous epoch; post-referendum, another anglo exodus had begun. Thousands left, worried about the future after the province came so close to leaving Canada.

King figured going half a world away was far enough to escape the constant separatist talk. She moved into PR once settled in Sydney, getting a doctorate in public communications and working with major brands like Disney, Toshiba and Sketchers.

But despite moving so far away, she'll always have a special place in the hearts — and ears — of Montrealers. And she admits she misses Montreal too — but not everything about Montreal.

"I don't miss the cold, I have to say," she said. "I watch the storms you guys had over the winter—still don't miss that."