Strong winds uprooted trees and damaged homes, but nobody was injured when a tornado touched down in the Ottawa area Sunday evening.

Environment Canada issued tornado warnings in eastern Ontario and western Quebec after someone spotted a twister near the Gatineau Airport just before 6 p.m. Officials later confirmed that a twister touched down in the suburb of Orleans, in Ottawa’s east end.

The warning, which was lifted about two hours after it was issued, came amid a small but powerful storm that brought damaging winds, hail and intense rainfall.

Debris closed several streets, including a major highway, but the city said they had all reopened by about 9 p.m.

“There was a lot of toppled trees, a lot of cars damaged, homes damaged by this thing,” said Marc Messier, a firefighter who lives in the neighbourhood affected by the tornado.

“You never would have known anything happened at my house, but even a block away there was some damage,” he said. “We were fortunate here.”

Messier was out for a drive with his grandson when the tornado struck, he said, and that they had to pull over to the side of the road for a time while waiting for the twister to pass.

Viewer just sent me this video from Orleans off roof being blown off pic.twitter.com/qYgSGyy5lT

The capital region was hit by several tornadoes less than a year ago, which flattened neighbourhoods and did severe damage to the power grid.

Messier said it’s disconcerting to see another twister touch down in his city so soon.

“We’re not used to getting these things here, but now we’ve had two in a matter of months and I hope it’s not a new trend,” he said.

The Distress Centre of Ottawa and Region, which offers 24/7 crisis and distress phone lines, noted that twisters like the one that touched down on Sunday can affect those who experienced the twisters in 2018.

Ottawa Public Health noted that stressful events like tornadoes can affect people’s emotions. The agency urged those who need support to seek it out.

The city is still in a state of emergency over floods earlier this spring. 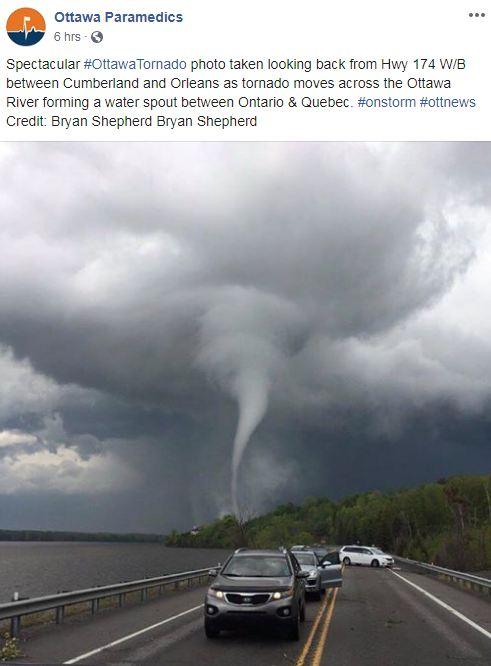 The weather in #Gatineau, Québec today just after we finished planting our flowers and vegetables. We were unaware of the #Tornado right next to us at #YND. I love my car more, can you tell? ?? #MINI pic.twitter.com/XVqVtH0k3F

I’ve made it back to #Orleans to check in on my son and this is just some of the damage in his neighbourhood. Jeanne D’Arc / Champlain area. #Ottnews #OnStorm #Tornado pic.twitter.com/EBZUPMyEQU