YOUR STORY: Another Lester B. Pearson school called out for racism

A Black West Island family is outraged after a questionable decision to put a photo of their Lindsay Place HS grad in the yearbook with the caption, Most Likely to be a Wanted Criminal. They say it's racist and want an apology.

The photo of Michael Thomas was included in a section that had categories such as Most Likely to Forget Their Cap and Gown or Most Likely to Win a Grammy.

"I couldn't believe it. I honestly wasn't expecting it. I was in shock," said Thomas, who's been going to Lindsay Place for five years.

"I feel betrayed because they know me. It's not like I'm a stranger or anything -  they know me this whole time and that's what they think of me?"

His mother Robin Thomas sent an email to the school upon the advice of a lawyer telling them to remove the offensive matter and to apologize.

"There's not many Black children in his school. We could probably count them on one or two hands so why does he have to be criminal? Because he's Black?" said Robin Thomas, who reached out to yourstory@cjad.com. 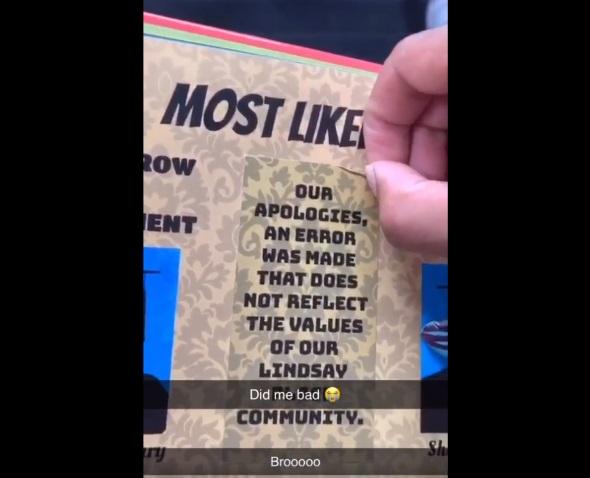 The yearbook was sent out with a new sticker covering Michael Thomas' face, saying "Our apologies, an error was made that does not reflect the values of our Lindsay Place community." But many people peeled it off and posted to social media about it.

Principal Kerry-Ann Payette said they don't know why the yearbook wasn't vetted or why the family wasn't contacted. They met with the yearbook committee to let them know this wasn't right.

"We wanted to involve the students in being a part of the process of this being a teachable moment especially during these times to say that, jokes or titles and labels are unacceptable," said Payette in an interview with CJAD 800.

Payette said they're retrieving the yearbooks and reprinting them without the section in question. They've also contacted the family to apologize in person.

The Thomas family said it's incredulous something like this could happen in this day and age.

"There is not just racism in America. There's racism everywhere. Those stereotypes are the ones that we're trying to end and especially during this time, after everything that's been happening. I  just find it's unacceptable," said Michael Thomas.