Alan Parker has an onslought of great films in his back pocket inlcuding Mississippi Burning, The Commitments and Midnight Express to name a few. Parker was also director of cult film The Wall, a movie built around PInk Floyd's The Wall album. Although Alan didn't like the movie and even came under harsh scrutiny by one of the grumpiest men in rock, Roger Waters; The Wall is loved by many.  I saw it for the first time when I was 16 and it blew me away. 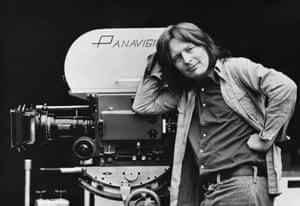 Making a film is so hard that if you don't have your main actors going along with the ride with the rest of the crew it can make your life very difficult. Particularly within the Hollywood machine. They've allowed more stars to take over and it can make everyone else's life a misery. But the truth is the actors are doing their job just the same as the camera assistant and the costume designer and everybody else. - Alan Paker

Alan Parker passed away at the age of 77 after long term battle with an undisclosed illness.

To read up on his films and awards click here.