A new Rye Whiskey is out that you would surely love to try - Blackened!

BLACKENED was created in 2018 by Metallica and late Master Distiller Dave Pickerell. It features a blend of the finest North American bourbons and ryes that were hand-selected by Dave and finished in black brandy casks. During finishing, the whiskey undergoes the BLACK NOISE sonic-enhancement where the low frequencies of Metallica’s music pummel the finishing barrel, visibly shaking it, causing greater interaction between the whiskey and the wood, thereby extracting more flavor and color. The playlist for the batches are traditionally selected by the members of Metallica and can be on the website at https://blackenedwhiskey.com/batch-playlists/.

In June of 2019, Master Distiller & Blender Rob Dietrich joined the fold after the passing of Pickerell, overseeing the sourcing, blending, and cask finishing of barrels for each batch.' - Jillian Pedrani 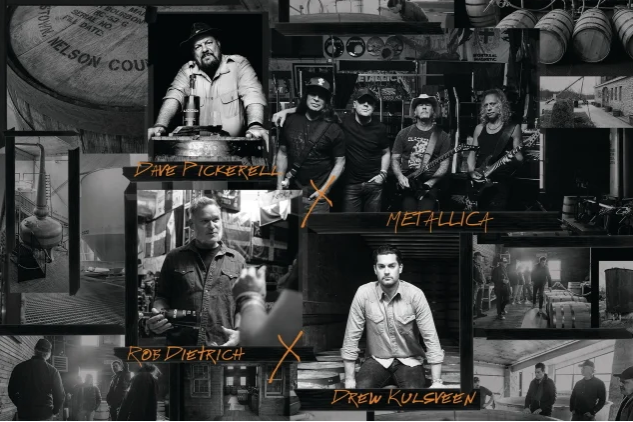 "The original idea with Blackened was to create something new, exciting, and unique that connected with both our fans and whiskey enthusiasts — something that stood on its own and was hopefully respected. The next step was to expand on Blackened's foundation, to push the possibilities of the marriage of music and whiskey even further. When we visited Willett Distillery in 2019 and saw the passion and craftsmanship that goes into every drop they produce, we knew we had found kindred spirits. Teaming up with the Kulsveen family to kick off the 'Master… Series' with Willett was the natural next step in Blackened's evolution." - Lars Ulrich (Drummer from Metallica)

The debut expression of the new “Masters of Whiskey Series,” which partners Master Distiller & Blender Rob Dietrich with other renowned whiskey makers to reimagine craft whiskey, the BLACKENED x Willett Kentucky Straight Rye Whiskey Finished in Madeira Casks was created in tandem with Willett Distillery and Master Distiller Drew Kulsveen. Its crafted from a base of high rye and low rye recipes hanse-selected by Rob and Drew from the Willett Family Estate Reserve Selection. The rye whiskies are married and finished in Madeira Casks, where they undergo the BLACK NOISE sonic-enhancement process. Both Rob and Drew selected the playlist for the process, which was then sequenced by Metallica Co-Founder and Drummer, Lars Ulrich. The expression is bottled at cask strength at 109.6 proof (54.8% ABV) and retails for an SRFP of $139.99. - Jillian Pedrani

I can't wait to hear what JD Our Whiskey connoisseur from CJAY Mornings has to say about this!

To read up more on the story behind this collaberation click here.