Call it what you like, Sarsfest, SarsStock, Molson Canadian Rocks Toronto, anyway this happened on this day, July 30th, 2003. I wasn't there but there is a good chance you were or someone you know was.

The idea was all brought together within a month after the Rolling Stones who love Toronto wanted to help the city out after it was hit hard by the Sars virus scare that kept many visitors away. The Plan? A massive concert to bring back tourism to Canada's biggest city.

Molson Canadian jumped on board as sponcer and what happened next was big. Over 450 000 attended the benefit concert in North Toronto. 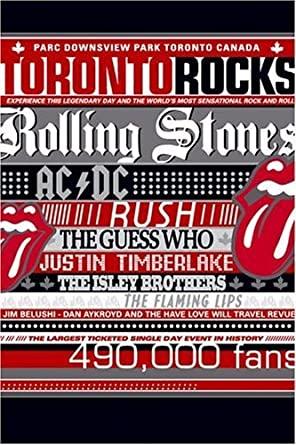 The line up was incredible and from whom I've spoken to first hand of people that went was that AC/DC stole the show. One friend of mine, actually got laid on top of a trailer backstage during their set..... Not my story, but what a story!

Bands included, Rush, The Guess Who, AC/DC, The Rolling Stones, Dan Akroyd, The Isley Brothers, The Flaming Lips and Justin Timberlake who got pelted with debris.

Crazy that we look back at this as we are in a world wide pandemic with no live music....or is there? haha check this out!

Enjoy 3 full sets of AC/DC, The Rolling Stones and Rush below.