Exactly one week after being exposed, scammers on Monday posted newly-worded ads online in hopes of getting gullible music fans in Canada to fork over cash.

The post in the “Gigs” section on Craigslist for Toronto seeks people who are “down to make some extra money + get into the acting world a little more” by posing as fans at a concert on Dec. 7.

The catch is that these “fans” have to pay $20 upfront for tickets to the show with the promise that “it’s reimbursed.”

Just like the earlier postings, the one published Monday does not mention the name of the artist nor the venue. But, unlike the previous ones, it makes no mention of “big special guests (Tory lanez, Chris brown, French montana).”

The new posting does make one thing clear, though. “If you don’t believe it or have issues with it. (sic) Just don’t bother texting.”

While the previous number to text had an Irvine, California area code, the new one has a number with a Newark, New Jersey area code. The number is for a text mail account, which can be set up from anywhere in the world. 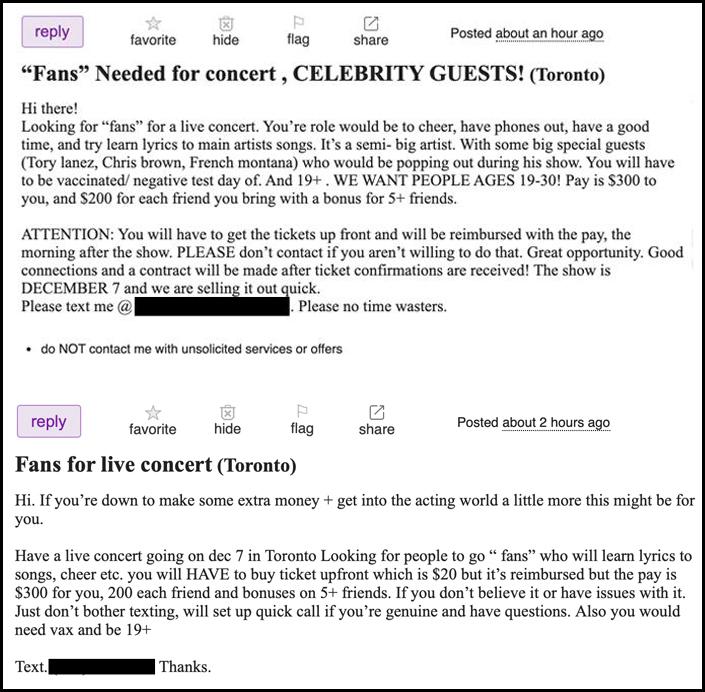 The original version of the online ad (top) and a version posted on Sept. 27 (bottom).

Similar ads are once again appearing on Craigslist in New York, Los Angeles, Houston and Seattle.

The Government of Canada’s Anti-Fraud Centre also cautions people about paying anything upfront.

After the iHeartRadio.ca report last week, an individual who identified himself as Sam Majorsky (but who used an email address with the name “Ian Michael”) made contact to insist it is not a scam. He declined to provide any details. “The burden of proof is not on me to prove it’s real but on you to prove it’s fake," he wrote.

He said Brown, Montana and Lanez are "close friends of ours" who will "come out as surprises and are not on the bill.”

“Sam” claimed "this is deformation (sic) as a journalist no information was put into this" and he warned: "Your (sic) content going down. Watch.”

According to multiple sources, “Sam” has previously named Dr Maleek as the artist who the hired “fans” will see. According to his website, Dr Maleek is scheduled to perform Dec. 7 at Lee’s Palace in Toronto and tickets are $20. (The show is not listed on the Lee's Palace calendar of events on its website.)

Update: Following publication of this article, emails claiming to be from Dr Maleek's management were received. "We are notifying you of the deformation (sic) caused in the article to our artist and it’s (sic) affiliate brands and are requesting the article to be taken down within the next 24hours (sic).

"Legally, we let you know our position! We do not know who you are but mentioning are (sic) clients (sic) name will be documented! And your claim using our client information for clickbait is false ! You sure do seem like a very strange dude ! And we will be sure to have this article removed for its falsified information. And in no way is dr maleek or any affiliates involved with any ' scam' towards any concerts/shows of his."