Wednesday marks the fifth anniversary of Justin Bieber’s arrest in Florida on suspicion of driving under the influence, resisting arrest without violence, and driving with an expired license.

Here’s a look back at how it all went down.

The Canadian pop star was behind the wheel of a rented yellow Lamborghini Gallardo LP 550-2 Spyder in the early morning hours of Jan. 23, 2014, in Miami Beach.

It remains unknown how Bieber, then 19, was able to get the car. The rental policy of Miami’s Lou La Vie – where rates start at $1,199 U.S. a day – states that drivers must be 25 years of age and older. Police said his Georgia driver’s license expired seven months prior to his arrest.

Miami Beach PD Officer Steven Cosner reported seeing two black SUVs behind the exotic cars “as if to stop traffic,” which “facilitated an open road for the two [cars] to race.”

According to the arrest report, Cosner “observed both vehicles start a contest of speed (drag racing) from a start.” He estimated that Bieber’s Lamborghini and Sharieff’s Ferrari reached speeds of double the posted 30 mph limit.

While Cosner initiated a traffic stop on the Ferrari, Officer Fulgencio Medina went after the Lamborghini. Bieber turned right onto 41st Street and pulled over. Medina approached the driver’s side window.

Bieber asked the officer: “Why did you stop me?”

Medina noted in the arrest report: “I immediately smelled an odor of alcohol emanating from the drivers (sic)  breath and bloodshot eyes.

“The driver had slow and deliberate movements and a stuper (sic) look on his face.”

Medina claimed that when he asked Bieber to step out of the vehicle, the pop star asked: “Why the f**k are you doing this?.”

Bieber allegedly kept putting his hands in his pockets so Medina ordered him to turn around and place his hands on the car so he could do a pat-down.

“I ain’t got no f**king weapons,” Bieber allegedly said. “Why do you have to search me? What the f**k is this all about?”

Medina reported that Bieber kept turning around to face him so he grabbed his right hand and told him he was being placed under arrest. In the arrest report, Medina claimed Bieber “began to resist me by pulling his right arm away as he stated: ‘What the f**k are you doing.”

At 4:13 a.m., Bieber was placed under arrest by Medina with the assistance of Officers Molina and Pete Socarras. The singer was transported to Miami Beach Police Department by Officer Martin Dionne, who reported that Bieber insisted he was not drunk.

In a 2015 interview with Complex, Bieber suggested he was treated unfairly because of his fame.

“The cop supposedly wanted to be famous for arresting celebrities, and someone had heard him say that prior to that,” Bieber said. "I wasn’t drinking … I might have had a beer earlier in the day or something.

At the holding facility, Dionne claimed Bieber had “a flushed face, bloodshot eyes, and the odor of an alcoholic beverage on his breath.” He was given a standard DUI test as well as Breathalyzer tests and provided a urine sample to test for drugs.

Bieber was charged with driving under the influence, resisting arrest without violence, and driving with an expired license.

“The police, they just wanted press. They wanted attention,” Bieber told Complex. "I never was speeding, I never was drag racing.” 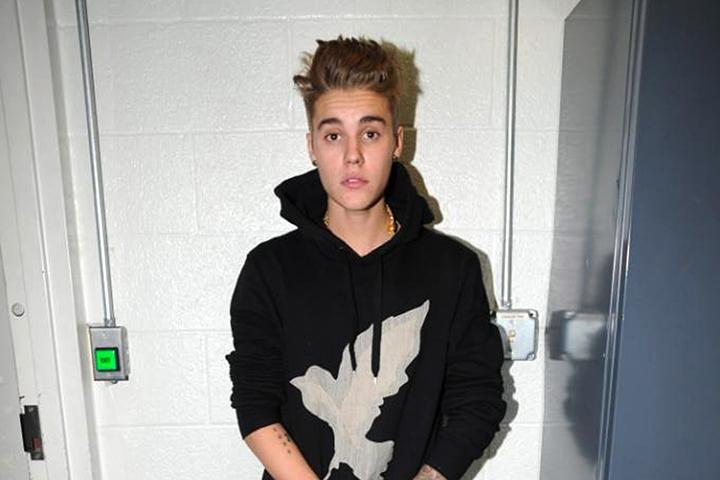 Wearing a black hoodie over a black tank top, black leather shorts over blue Ethika underwear, and bright red sneakers, Bieber was processed and booked into the system. His arrest report indicated the pop star stood 5’9” and weighed 140 lbs. and had short brown hair and brown eyes.

The report also listed his citizenship as “USA”. Bieber, who lived in the U.S. since he was 13, had a green card but was not an American citizen. It also showed his place of birth as “Toronto” even though Bieber was born in London, Ontario.

Shortly after 10 a.m., Bieber was taken from Miami Beach Police Department headquarters to the Turner Guilford Knight Correction Center – a 25-minute drive – in the back of a prisoner transport van. Waiting for him there were dozens of reporters, photographers and fans. 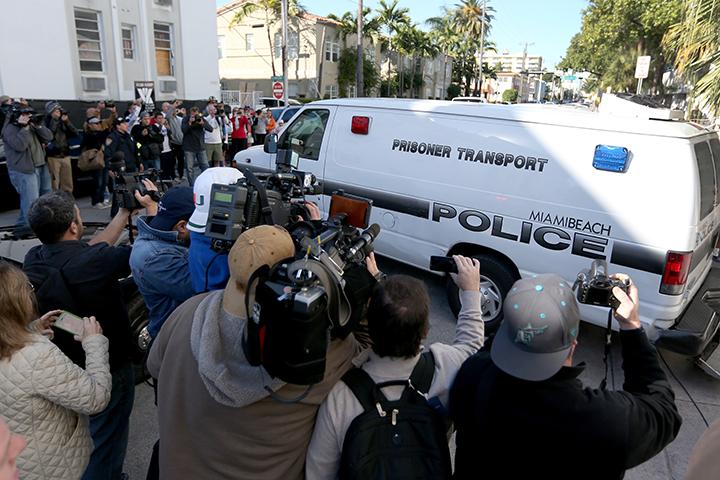 Bieber, in his prison-issued red outfit, smiled for his mugshot but remained stone-faced when he appeared via video link shortly after 1 p.m. in front of Miami-Dade County Judge Joseph P. Farina. Defence lawyer Roy Black, retained by Bieber’s manager, agreed to a $2,500 U.S. bond.

Bieber was released from detention just after 2 p.m. With his hood pulled up and sporting sunglasses, he briefly sat on the roof of his waiting black SUV to wave to the crowd waiting outside the facility.

“I’m telling you that 24 hours sucked,” Bieber told Complex of his time in custody (which was, in fact, less than 10 hours). “It was really cold. That was the worst part about it.

“It’s freezing; it’s uncomfortable; there are people in there you just don’t want to be around. I had people who were yelling at me. They were saying, ‘Bieber! We f**k with you, bro! We love you! Aye! Keep your head up, bro!’ It was kind of funny to hear that, especially from cats in jail.”

Bieber pleaded not guilty to all charges.

In the wake of the arrest, his manager Scooter Braun tweeted: “@justinbieber love you and I will act in the manner of someone who truly cares. That is all I have to say. Thanks for all those concerned.

“Been a long day. Bottom line is we are defined by how we handle adversity. Be there when it counts. Love fully in good times and bad.”

Seven months later, prosecutor Katherine Fernandez Rundle said a plea agreement had been reached. The state agreed to drop the DUI charge in exchange for Bieber pleading guilty to careless driving and resisting arrest. He would pay a $500 fine and attend a 12-hour anger management course. (Bieber had also donated $50,000 to a children’s charity.)

“The ultimate purpose of the Miami Beach Police Department's initial traffic stop was to end some rash juvenile type conduct before a tragedy occurred,” Fernandez Rundle explained in a statement to the media at the time. “The intervention and counselling parts of the plea should provide a pathway toward adult responsibility.”

Bieber wasn’t in the courtroom on Aug. 13, 2014 when Judge William Altfield accepted the plea deal.

“Here is someone who is young. His whole life is ahead of him and he just hopefully will get the message. He will grow up. He will use all of his talents positively for young persons.”

Bieber evidently got the message. In 2017, he posted his 2014 mugshot alongside a current photo and captioned it: “I LOVE THIS because it reminds me IM NOT EXACTLY WHERE I WANT TO BE BUT THANK GOD IM NOT WHERE I USED TO BE!! THE BEST IS YET TO COME DO YOU BELIEVE IT?”

I LOVE THIS because it reminds me IM NOT EXACTLY WHERE I WANT TO BE BUT THANK GOD IM NOT WHERE I USED TO BE!! THE BEST IS YET TO COME DO YOU BELIEVE IT?