Among those remembering the singer are NKOTB members Donnie Wahlberg and Jordan Knight, who co-wrote Page’s big hit.

“The reminders of how precious life is, are all around us,” Wahlberg tweeted early Sunday. “Yet, we so often take the present moment for granted. Be #Thankful for today.”

Wahlberg also shared a photo of the three men recording “I’ll Be Your Everything.” 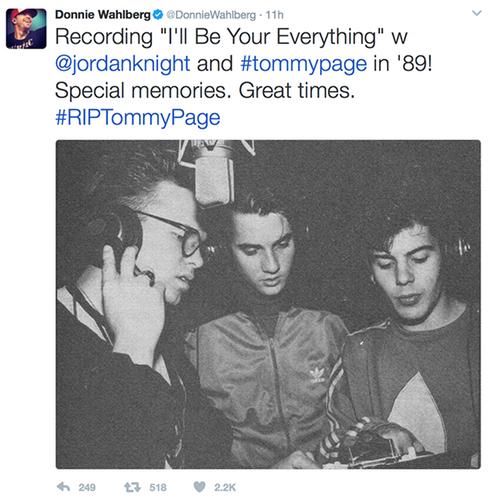 Knight tweeted: “So sad to hear about this. #riptommypage. My deepest condolences to his family and loved ones.”

Page was found dead Friday of an apparent suicide. He leaves behind his husband Charlie and their three children.

NKOTB’s Jonathan Knight tweeted: “In your darkness I pray you now find light! Your bright soul will continue to shine in my heart forever. #RIPTommyPage."

Joey McIntyre shared: "I remember his same genuine smile he have every time you saw him. A very sad loss."

Page was working in the coat-check of a New York City nightclub when he was signed to a recording contract and went on to release seven studio albums between 1988 and 2000. (He never stopped making music and performing live, mostly overseas.)

Page studied at the Stern School of Business and landed an executive job at a record label, where he worked with a long list of artists, including Canadians Michael Bublé, Alanis Morissette and David Foster.

“A kind and wonderful man who helped me a lot early on,” Groban tweeted. “Helped pick my first singles. He was and is so loved. RIP my friend.”

Page became publisher of Billboard magazine and then took executive positions at companies like Pandora.

Songwriter Diane Warren shared her heartbreak on Twitter with a series of messages and photos.

“Someone I lovrd so much was the last person U would ever think would do this,” she tweeted. “Why why why Tommy??????

“U never know who is in pain. The ones who truly r never show it.”

Warren said she is “devastated.”

Singer-actress Ashley Tisdale honoured Page for his role in her career.

“Without Tommy Page there would not have been a Headstrong or Guilty pleasure album,” she tweeted. “I don't understand, no words #rip love you Tommy.”

Pop stars from the '90s also paid tribute to Page on social media.

Tiffany said she is "overwhelmed with the sad news" of Page's death. "The memories,the music,the friendship will forever be in my heart," she shared on Twitter. Debbie Gibson tweeted: "Devastated over the loss of my friend Tommy Page. My heart goes out to Tommy's friends, family and fans. Rest In Peace."

Full House star Andrea Barber tweeted her condolences. "So sad and shocked to hear about the passing of @Tommypage, one of our beloved guest stars on Full House."

Page wrote and recorded “A Shoulder To Cry On,” which was released in 1989. In it, he sings: “Life is full of lots of up and downs / And the distance feels further when you're headed for the ground / And there is nothing more painful than to let your feelings take you down / It’s so hard to know the way you feel inside when there's many thoughts and feelings that you hide.

“All of the times when everything is wrong / And you're feeling like there's no use going on / You can't give it up / I hope you work it out and carry on.”

If you are thinking about suicide, click here for help.