Azealia Banks announced her decision to cancel her forthcoming album, Fantasea II: The Second Wave, on her Instagram story on Sunday, shortly after sharing her negative experience while filming an episode of Nick Cannon’s MTV Wild 'N Out.

“Album is cancelled. I need some time to relax and bounce on d**k. I’ll release new music when I feel like it…” the rapper wrote. 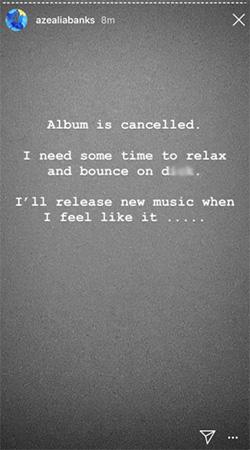 In a separate story post, Banks accused the Wild ’N Out cast of making jokes about her that brought the rapper to tears.

“I did Wildin’ out today. There were tons of pre-planned colourist jokes and of course…cry baby cried,” Banks alleged.

The “212” rapper then went after Cannon personally in another Instagram story post, commenting on the hosts lupus diagnosis.

"If I were to make fun of Nick Cannon for having lupus and being weak and sickly......... if I made a joke that said he'd be dead by the end of the year... then Azealia Banks is the bad guy.... Right?" she wrote.

Cannon quickly took a screenshot of the message, and fired back with a post on his own page, captioning "Don't you hate when you create your own storms but forget your umbrella???” 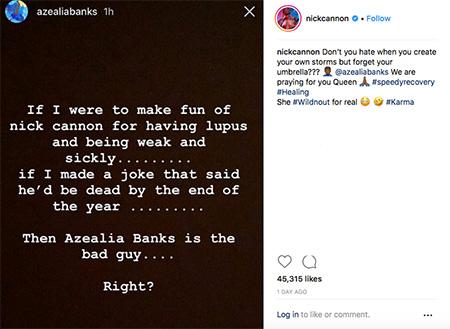 Wild ’N Out cast member Emanuel Hudson also contributed his side of the story during the filming of the show in his own Instagram post on Monday.

“Azealia B came on that show, got called ugly, tried to joke back, didn’t work, cried, then performed a weak a** Forever 21 shopping song!” 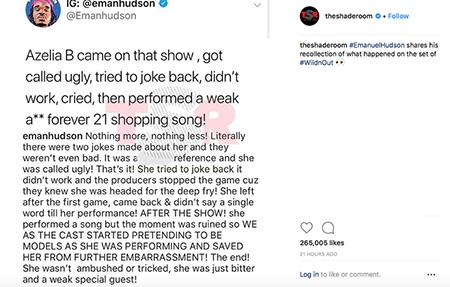 Banks, so far, has shared two singles from the forthcoming album, “Anna Wintour” and “Treasure Island.”