Beyoncé and Jay-Z surprised fans on Saturday with the release of their first-ever joint album, Everything Is Love.

"Because we love you all so much we have something special for you,” Beyoncé announced at the end of their second On The Run Tour II show in London. Fans were then left with “ALBUM OUT NOW” displayed on the screens.

The nine-track joint album was released alongside a six-minute video for their single “APES**T,” which was reportedly filmed at The Louvre in Paris in May, according to CNN. The cover art from the album features two of Beyoncé's dancers, So You Think You Can Dance contestants Jasmine Harper, and Nicholas “Slick” Stewart, and is a still image taken from the music video. 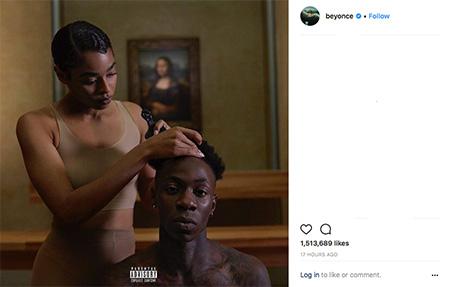 Everything Is Love was initially released under Jay-Z's music streaming service, and will be available across all platforms soon.

The Carter's will kick off the North American leg of their On The Run II Tour in July, with a stop in Vancouver on Oct. 2.

Watch the video for "APES**T" below (Warning: Contains language some may find offensive):