With a win for Best R&B Performance at Sunday night's 63rd Grammy Awards, Beyoncé made history as the female artist with the most Grammys – a whopping 28.

Calling it "a magical night," Beyoncé spoke about the importance of "Black Parade," the song that gave her one win more than Alison Krauss and put her in a tie with Quincy Jones.

"As an artist I believe it’s my job and all of our jobs to reflect the times and it’s been such a difficult time," she explained. "So I wanted to uplift, encourage, celebrate all the beautiful Black queens and kings that continue to inspire me and inspire the whole world."

Moments earlier, Beyoncé was on stage with Megan Thee Stallion, who accepted the Best Rap Song award for their "Savage" remix. (An emotional Megan won her first Grammy – Best Rap Performance for the “Savage” remix – during the non-televised show earlier in the day.)

Megan – the first female rapper to win for Rap Song – shared how she grew up determined to one day be "the rap Beyoncé." Queen Bey added: "I have so much respect for you and I'm honoured that you asked me to be part of the song."

Billie Eilish said her win for Record of the Year (for "Everything I Wanted") belonged to Megan Thee Stallion. "This is embarassing for me," the singer said, before praising Megan.

"You deserve this... You deserve everything in the world," said Eilish. "I think about you constantly, I root for you always ... Genuinely, this goes to her. Can we just cheer for Megan Thee Stallion, please." 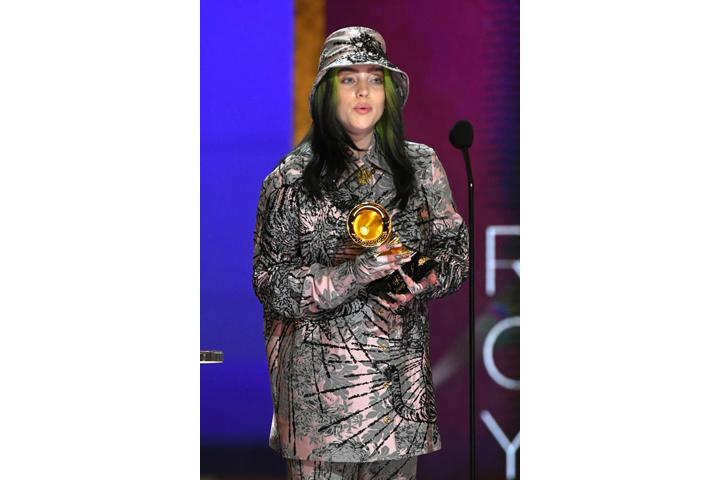 Megan had won the first award handed out on the prime time show – Best New Artist. “I really want to say thank you to my mama,” the rap star said. “She’s not here with me today but she's here with me in spirit. She always knew I could do it.”

The 63rd Grammy Awards show was both a celebration of music and a sign of these COVID times.

On display was a stellar line-up of performances – each one creatively staged – as well as plenty of social distancing and masks.

“This is the rare awards show where the white stuff going up people's noses is cotton swabs,” joked host Trevor Noah, who moved from the outdoor space into the Los Angeles Convention Center.

The show then kicked off with live performances by Harry Styles (“Watermelon Sugar”), Billie Eilish (“Everything I Wanted”) and Haim (“The Steps”).

The rest of the show was a seamless blend of live and pre-taped performances, including by The Black Pumas (“Colors”), Da Baby and Roddy Ricch (“Rockstar”), Bad Bunny and Jhay Cortez (“Dákiti”), Dua Lipa (“Levitating,” “Don’t Start Now”) – and the first live performance of “Leave the Door Open” by Silk Sonic – aka Bruno Mars and Anderson .Paak.

Taylor Swift was backed by collaborators Jack Antonoff and Aaron Dessner for a medley of “Cardigan,” “August” and “Willow.”

Megan Thee Stallion and Cardi B showed off their lip sync skills – and a lot of skin – for a medley of Megan’s “Body” and “Savage,” Cardi’s “Up” and their collab “WAP.” Post Malone performed "Hollywood's Bleeding."

The country genre was repped by Mickey Guyton singing “Black Like Me,” Miranda Lambert doing “Bluebird” not long after her album Wildcard won Best Country Album, and Maren Morris (backed by John Mayer) performing “The Bones.”

BTS contributed a pre-taped performance from Seoul of their smash hit "Dynamite."

Even the traditionally schmaltzy “In Memoriam” segment was refreshed by mixing in performances in honour of some of the artists lost. Bruno Mars, with Anderson .Paak on drums, paid tribute to Little Richard with a medley of “Good Golly Miss Molly” and “Long Tall Sally”;  Lionel Richie sang “Lady,” the song he wrote for Kenny Rogers in 1980; and Brandi Carlile delivered John Prine’s last recorded song “I Remember Everything.” Brittany Howard, backed by Chris Martin on piano closed out the segment with “You’ll Never Walk Alone” from the 1945 musical Carousel.

The Song of the Year honour went to H.E.R. and co-writers Dernst Emile II and Tiara Thomas.

“I’ve never been so proud to be an artist,” said H.E.R. “We wrote this song over FaceTime and I didn’t imagine that my fear and that my pain would turn into impact and it would possibly turn into change.

MORE: Who Won What At Grammys

Picking up the award for Best Pop Vocal Album – for Future Nostalgia – Dua Lipa singled out her fans. “This is all because of you. Honestly, this is all you,” she said. “And I appreciate every single thing that you have done for this album.”

Swift's folklore was named Album of the Year, making her the first female artist to win the category three times.

Harry Styles nabbed his first ever Grammy: Best Pop Solo Performance for “Watermelon Sugar.” After a hearty embrace with manager Jeff Azoff, the singer took to the platform to thank his fellow songwriters Mitch Rowland, Tyler Johnson and Thomas Hull.

“To everyone who made this record with me, thank you so much,” said Styles. “This was the first song we wrote after my first album came out, during a day off in Nashville.”

Listen to music from Grammy winners