U2 frontman Bono chose his 62nd birthday on Tuesday to announce that his long-awaited memoir Surrender will be out on Nov. 1.

“When I started to write this book, I was hoping to draw in detail what I’d previously only sketched in songs,” the singer explained, in a release. “The people, places, and possibilities in my life.

“Surrender is a word freighted with meaning for me. Growing up in Ireland in the seventies with my fists up (musically speaking), it was not a natural concept. A word I only circled until I gathered my thoughts for the book. I am still grappling with this most humbling of commands. In the band, in my marriage, in my faith, in my life as an activist. Surrender is the story of one pilgrim’s lack of progress . . . With a fair amount of fun along the way.” 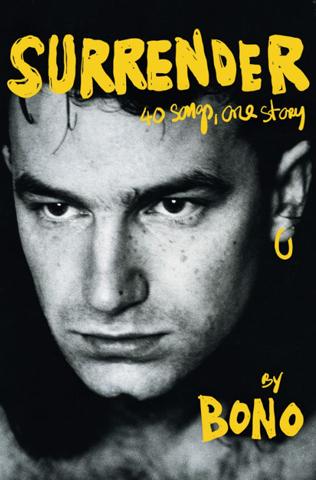 The book’s subtitle, 40 Songs, One Story, refers to its 40 chapters named after U2 songs. Bono also did 40 original drawings that appear throughout the book.

Surrender, the rights to which were acquired by publisher Alfred A. Knopf seven years ago, will be available in hardcover and e-book as well as in audio format read by the singer.

Bono and bandmate the Edge performed this past weekend in a Kyiv subway station.

Listen to music from U2