According to reports, Thicke suffered a heart attack while playing hockey with his youngest son Carter. He was rushed to a Burbank hospital.

On Twitter, Carter shared: "Today I lost my best friend and my idol, and the world lost one of it's finest. You are a legend and I love you Pops. Until next time."

Although he had a long list of credits, Thicke was best known for playing dad Jason Seaver on the family sitcom Growing Pains, which ran from 1985 to 1992.

But, in his native country, he was already famous for hosting The Alan Thicke Show on CTV from 1980 to 1983. The success of that talk show lead him to the U.S., where he hosted the short-lived Thicke of the Night.

Born in Kirkland Lake, Ont., he got his start on TV in the 1970s as host of First Impressions, a game show that aired on Montreal's CFCF (now CTV Montreal).

Thicke was honoured on Canada's Walk of Fame in 2013.

On Dec. 2, Thicke received an Icon Award at the Whistler Film Festival in B.C. He later tweeted his thanks and added: "I promise to try and stay iconic."

Thicke co-wrote the theme songs to the hit comedy series Diff'rent Strokes and The Facts of Life as well as a number of game shows, including the original Wheel of Fortune.

Of course, Thicke is also the father of pop singer Robin Thicke.

Singer John Legend paid tribute on Twitter.  "I grew up watching him and got to know him through Robin," he tweeted. "He was always so kind to me. So sad to hear about his passing."

Canadian icon Anne Murray said she was "shocked" and "devastated" by the news. "A friend for many years, he wrote & produced so many of my TV Specials," she tweeted.

Demi Lovato shared: "Had the pleasure of meeting Alan Thicke and his amazing wife Tanya a few years back.. my thoughts and prayers are with his family."

Thicke, along with Tanya and Carter, recently starred in the faux-reality series Unusually Thicke. 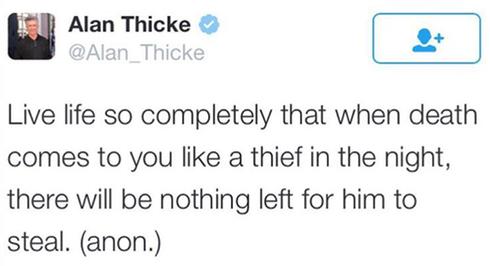