Canadian Artists Join Voices For 'Lean On Me'

Sunday night’s Stronger Together, Tous Ensemble broadcast culminated with the premiere of an all-star version of the classic “Lean On Me.”

The Canadian artists who make up ArtistsCAN were assembled by singers Tyler Shaw and Fefe Dobson.

“It’s been a whirlwind three weeks but we got it done,” Shaw told iHeartRadio.ca.

The COVID-19 crisis has hit close to home for Shaw, whose wife of nearly two years, Alexandra Karolczyk, is on the frontlines of the pandemic.

“She works in a hospital. Thankfully she’s got the protective equipment,” the 27-year-old singer said. “Obviously there’s a still a risk. Every time she comes home, in my mind I’m resetting the mandatory two weeks, essentially.

“It’s scary but at the same time we’re taking the necessary precautions.” 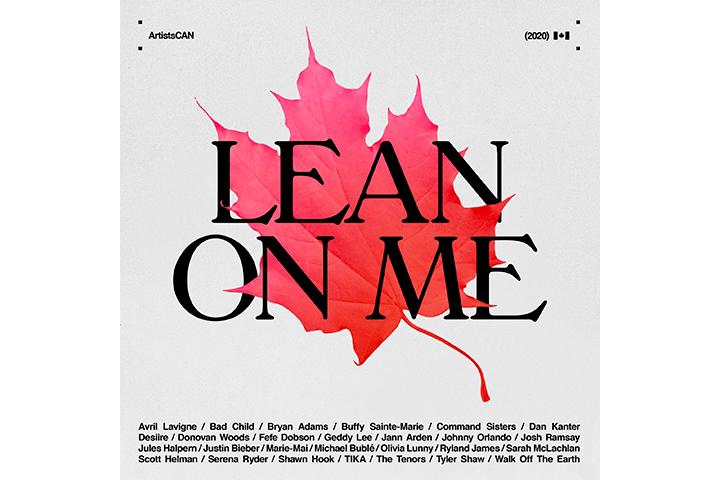 The idea to record “Lean On Me” as a charity single was sparked earlier this month when Shaw read about the death of Bill Withers, who wrote, produced and performed the song in 1972.

“I was on the internet going through all his accomplishments and his musical legacy,” he recalled. The lyrics struck a chord.

But, Shaw said, he wanted to do more than simply cover the song. “I wanted it to be a collaborative experience.” He reached out to Dobson, who loved the idea of bringing the homegrown music community together.

“We started reaching out to different Canadian artists and it went way further than we thought it would ever go,” admitted Shaw. “We had certain people in mind and we got 99 percent of those people that we wanted."

Those who said yes include Avril Lavigne, Justin Bieber, Bryan Adams, Geddy Lee, Jann Arden, Sarah McLachlan – and the man Shaw has credited with teaching him how to sing, Michael Bublé.

Combining all these voices took some work. “It was tough because you can imagine what it will sound like but you won’t know for sure what it actually will sound like,” Shaw explained, “so thankfully most people sent in a whole take of the song so that way we just pieced it all together.”

Shaw said producer Jon Levine was “very, very gracious and lent his time to help us out with this and created the music and pieced every one in so that it showcased everyone on the list.” (The track was mixed by Jason Dufour.)

All proceeds from the single will go to the Canadian Red Cross and its COVID-19 relief efforts. Donations can be made at artistscan.com. But, Shaw added, “we understand that everyone is in a different financial situation right now so just streaming the song and watching the video on YouTube will do just as much.”

The ArtistsCAN version of “Lean on Me” comes just a few days after the 48th anniversary of the release of the original. Withers’ recording went to No. 1 on the Billboard Hot 100, as did a cover of the song by Club Nouveau in 1987 – which earned Withers a Grammy as songwriter of the Best R&B Song.

Of course, this is not the first time Canada’s music community has come together for a good cause.

In 1985, several homegrown artists became Northern Lights to record “Tears Are Not Enough,” which raised more than $3 million for famine relief projects in Africa (with some proceeds going to Canadian food banks). And, dozens of Canadian artists joined voices for a cover of K’naan’s hit “Wavin’ Flag” in 2010 to support earthquake relief efforts in Haiti. The single by Young Artists for Haiti raised more than a million dollars.

Shaw, whose hits include “With You” and “Kiss Goodnight,” is anxious to get back on the road but admitted the impact of social distancing and self-isolation has been minimal.

“I usually stay home and write music anyway,” he said, “so not too much has changed.”

BELOW: Watch the video for "Lean On Me"

Listen to music from artists on the song