Canadian Awards Given To Phil Collins Up For Auction

Gold certifications presented to Phil Collins by the Canadian Recording Industry Association (CRIA) and WEA Music of Canada in the early ‘80s are among the awards the singer’s ex-wife has put up for auction.

Collins received the CRIA plaque commemorating the sale of 50,000 units of Robert Plant’s album Pictures at Eleven, on which Collins played drums. According to the auction house, the piece is estimated to fetch between $100 and $1,000 (all figures U.S.).

Orianne Cevey is also hoping to get the same amount for a gold award Collins received from WEA Music of Canada for his work on drums on Plant’s 1983 album The Principle of Moments. 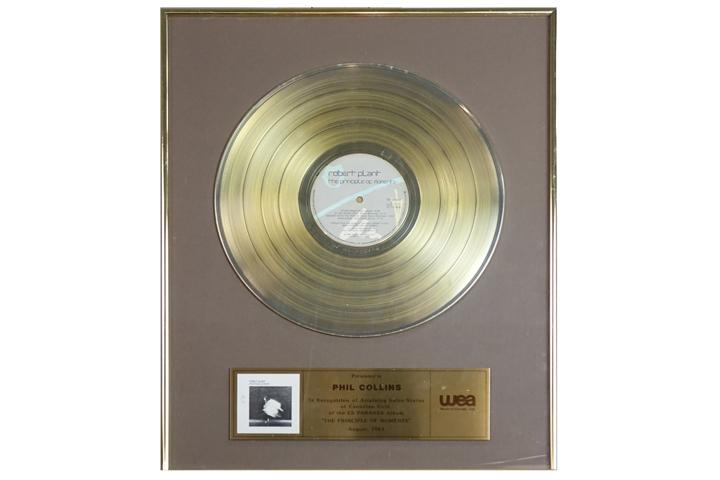 Also up for auction is a lot described as “Assorted Phil Collins Awards,” which includes a plaque from Orlando Arena commemorating Collin’s sold-out 1994 concert.

Last year, Collins went to court to evict Cevey and her husband from his Miami Beach mansion, which was once home to Jennifer Lopez. Collins recently sold the property for a reported $40 million.

Cevey’s auction includes designer clothes and accessories as well as pieces from her jewelry collection, a stamp collection, coins and other personal items. Online bidding is open now for the Feb. 3 auction.