You may have seen Instagram it-girls Bella Hadid, Emily Ratajkowski, and Kendall Jenner promoting Fyre Festival on your feeds since it was first announced in December of last year. The festival – created by rapper Ja Rule and coming with a reported $12,000 price tag – was essentially a reason to get young, beautiful people down to the Bahamian island of Great Exuma to post lavish pictures on luxury yachts with the hashtag #FyreFest. Unfortunately for Ja Rule, the hashtags that have been trending since the festival’s start have been #DumpsterFyre and #FyreFraud.

When those people who shilled out thousands for a ticket to the ‘luxury’ fest made their way to the island, it quickly became clear that there was no organization and mass chaos at Fyre. (Tickets for the event ranged from $4000, to a VIP package costing $250,000 split between 12 people.) Flights were cancelled or delayed, the ‘luxury’ food was a slice of cheese on bread in a styrofoam box, and the lavish tents attendees were meant to stay in were half-finished and were disaster relief tents. People were made to wait on the beach as tents were finished setting up; they had no access to their luggage and it was raining.

Blink-182 were the first to pull out of performing. “Regrettably, and after much careful and difficult consideration, we want to let you know that we won't be performing at Fyre Fest in the Bahamas this weekend and next weekend,” the rockers shared on Twitter. “We're not confident that we would have what we need to give you the quality of performances we always give fans.” 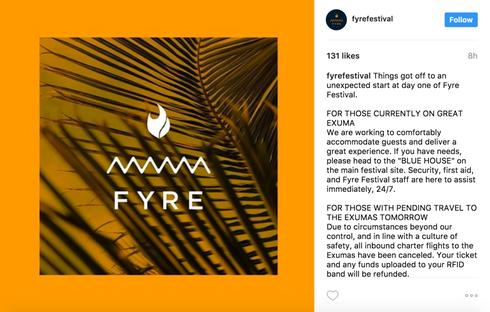 The first weekend of the event was cancelled after attendees began posting the realities of their situation on social media. The organizers posted a message on Instagram explaining the cancellation, saying, “Things got off to an unexpected start at day one of Fyre Festival. FOR THOSE CURRENTLY ON GREAT EXUMA We are working to comfortably accommodate guests and deliver a great experience […] Thank you for bearing with us as we work through the growing pains that every first year event experiences. Revised itinerary information will be shared soon for the remainder of this weekend and weekend two.”

Here is just a few of the many hilarious responses on the #FyreFestival hashtag: 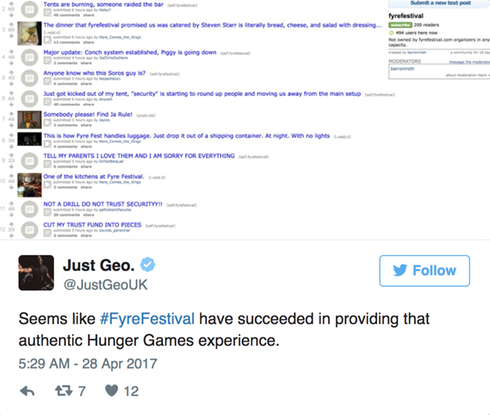 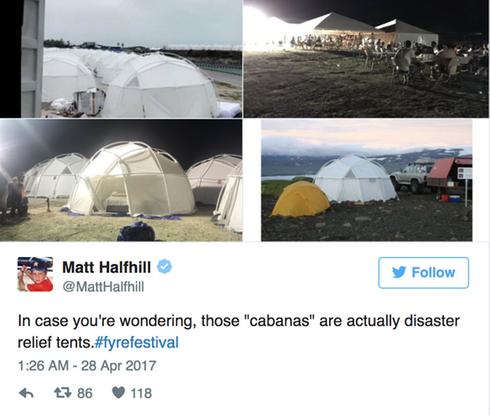