“You’re (sic) role would be to cheer, have phones out, have a good time, and try learn (sic) lyrics to main artists (sic) songs,” reads the posting, which claims the artist is “semi-big.”

According to the posting, “some big special guests (Tory lanez, Chris brown, French montana)” will be at the show, which is scheduled for Dec. 7. (Interestingly, it claims fans "will have to be vaccinated/ negative test day of" – but a negative COVID-19 test does not allow entry to bars and clubs in Ontario.)

No details about the artist or venue are provided. People interested in the gig are asked to text a mobile number in Irvine, California.

So what’s the catch? The posting explains that these "fans" will have to purchase tickets “up front and will be reimbursed with the pay, the morning after the show.” It adds: “PLEASE don’t contact if you aren’t willing to do that.” It promises “a contract will be made after ticket confirmations are received.”

Similar ads are appearing on Craigslist in other major cities like New York, Los Angeles, Houston and Seattle.

The New York City Craigslist post offers $250 after the purchase of $20 tickets to a Dec. 9th concert by “a major artist on his first ever headlining tour” with special guests “(Tory lanez, french montana) etc.” The Los Angeles version also offers $250 payment after buying $20 tickets and claims “big special guests will be in the building (Tory lanez, Chris brown, etc.)” on Dec. 16.

Ads on Craigslist in Houston and Seattle promise $300 – "and for every friend you bring it's an extra 200$ each" – to attend show on Dec. 12 and Dec. 1 respectively. The Houston posting claims "Big special guests will be in the building. (Tory lanez, french montana, Trav Scott) etc." and the Seattle one names "Tory lanez, french montana, Lil mosey."

People have also reported receiving unsolicited text messages from the same number shown in the Craigslist ads from “Sam” claiming to “work on behalf of a record label/touring department.”

He wrote: “I’m contacting you about an acting opportunity for a REAL live concert … for one of our lesser known artists going on his first headlining tour.” Sam offered $250 plus reimbursement of the ticket price “and $150 extra for friends coming also! … More than 5 people is extra pay also!”

One online forum includes several comments about Sam. “I got a random text from this number, claiming his name is Sam and he got my number from an ‘exclusive partner’ who wants to remain anonymous (ok, sketchy  much?),” reads one. “Said he works for a record label and offered a job for me to act as a fan in a concert, and that I’ll be paid and reimbursed for my tickets (hmmm, so I have to put money upfront for this so-called ‘job’). When I asked for name of said record label and why his ‘exclude partner’ wants to remain anonymous, he refused to tell me. Sounds like a scam. Blocked the number.”

Another person reported: “Also got a text offering to pay $$ to go to a concert. Asked for more information, was told I'd be paid either by Venmo Zelle or Cash App, wanted me to text ‘conformations' of the ticket purchase. When I asked for their e-mail so I could look out for it they told me ‘don't be slick,’ lol. Unsure if legit or just aggressive.”

A text message seeking more information, sent to the number in the post, received no response. A call to the number resulted in a recorded message explaining that the owner “has a voice mailbox that has not been set up yet.”

Following publication of this article, an individual in Fountain Valley, California who identified himself as Sam Majorky (but who used an email with the name "Ian Michael") insisted it is not a scam but declined to provide any details about the artist or Toronto venue. "The burden of proof is not on me to prove it’s real but on you to prove it’s fake," he wrote.

He said Brown, Montana and Lanez are "close friends of ours" who will "come out as surprises and are not on the bill."

The individual claimed "this is deformation as a journalist no information was put into this" and he warned: "Your (sic) content going down. Watch."

Check out the ads appearing on Craigslist in Toronto and several U.S. cities: 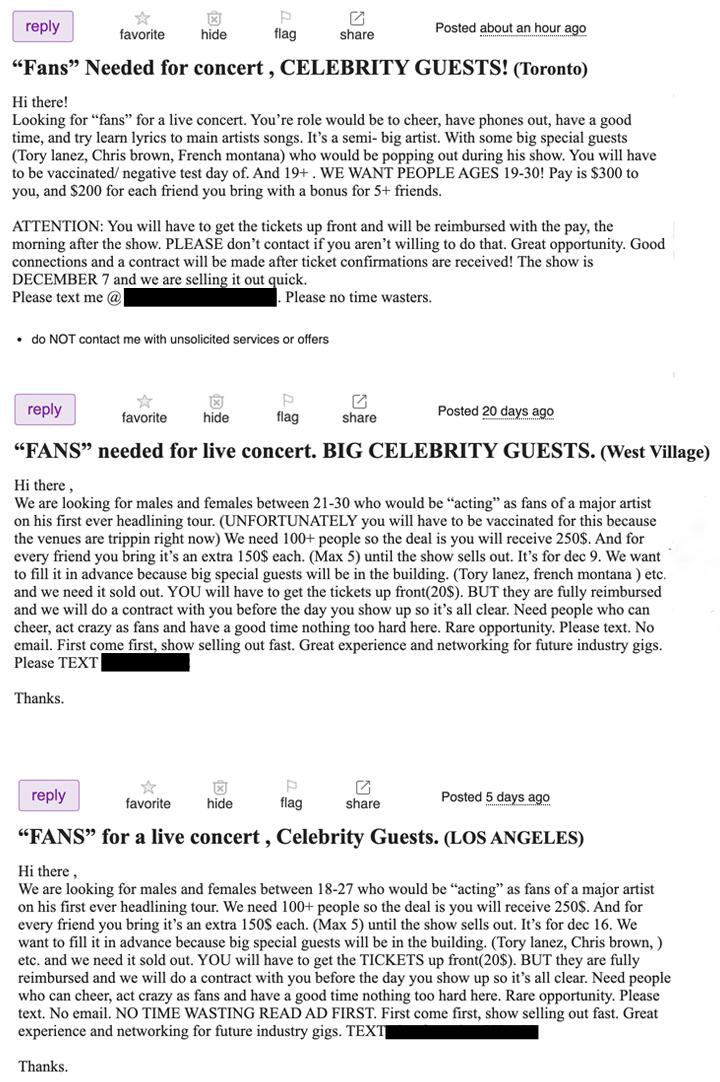