Joe Diffie, who had a string of country hits in the 1990s, died Sunday from complications of COVID-19. He was 61.

The singer’s death came only two days after his rep issued a statement sharing the news that Diffie was “under the care of medical professionals and currently receiving treatment” for the respiratory virus.

“We want to remind the public and all my fans to be vigilant, cautious and careful during this pandemic,” it read.

“This is so heartbreaking, I just don’t even know what to say,” tweeted John Michael Montgomery. "A sad, sad day for country music.”

“Losing a legend in country music is heartbreaking. Losing a legend far too early, even more so,” tweeted Canadian country star Brett Kissel. “I hope Kenny Rogers has a beer ready for Joe up in heaven…” 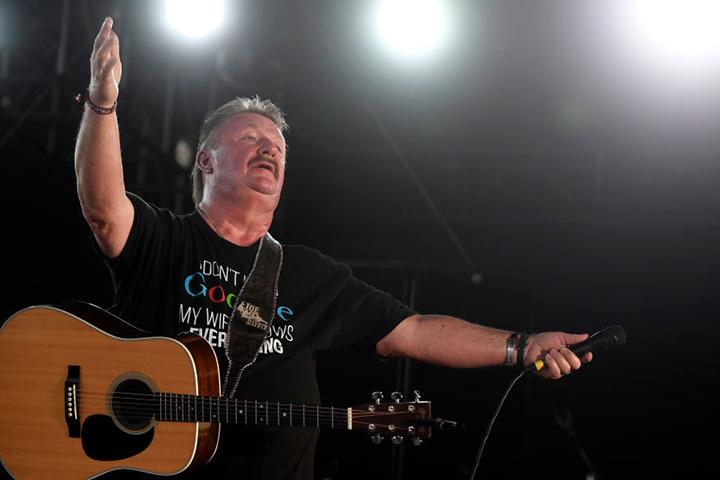 A native of Oklahoma, Diffie recorded 11 solo albums between 1990 and 2010 that spawned five No. 1 hits on the Billboard Hot Country Songs chart: “Home,” “If the Devil Danced (In Empty Pockets),” “Third Rock from the Sun,” “Pickup Man” and “Bigger Than the Beatles.” He also released All in the Same Boat in 2013 with Sammy Kershaw and Aaron Tippin and reportedly planned to put out a new solo album.

Diffie won a Grammy in 1998 for “Same Old Train,” a collaboration with Marty Stuart. He later became a host on Oklahoma radio station Big Country 99.5.

“Joe, thank you for all of the music and light you've given us,” read a tweet from the Grand Ole Opry, where Diffie was a longtime member. “Thank you for letting us be part of your dream.”

"Well I ain't afraid of dying it's the thought of being dead / I want to go on being me once my eulogy's been read / Don't spread my ashes out to sea don't lay me down to rest / You can put my mind at ease if you fill my last request / Prop me up beside the jukebox if I die."

Tributes to Diffie have been flooding social media.

Chris Young, who sings “Got my Honky Tonk attitude from Joe Diffie” in his 2019 song “Raised On Country,” tweeted: “I used to drive back and forth from Texas to TN listening to nothing but Diffie’s] songs… I was lucky to get to know him.”

Country singer Chely Wright shared on Twitter that her heart “is absolutely breaking” and remembered Diffie as “so nice and so great to tour with and one of the best country music singers of all time.”

Charlie Daniels called Diffie’s death “such a shock and such a loss for Country Music.”

“Here’s to you Pickup Man. You inspired an entire generation of country singers and accepted us all with kindness, gratitude and buckets of talent,” remember Granger Smith.

Travis Tritt shared on Instagram: “Joe was a good friend and touring partner with me in the 90s. We had a lot of great times together, both onstage and offstage. This comes as a huge shock to all of us in the country music community who loved Joe and his talent. “

Diffie leaves behind wife Tara and five children from his first three marriages.

Listen to music from Joe Diffie