Singer-songwriter and musician David Crosby has died at 81 after a long illness.

“He was lovingly surrounded by his wife and soulmate Jan and son Django,” read a statement from his family. “Although he is no longer here with us, his humanity and kind soul will continue to guide and inspire us. His legacy will continue to live on through his legendary music.

“Peace, love, and harmony to all who knew David and those he touched. We will miss him dearly.”

Crosby was a founding member of the Byrds and Crosby, Stills & Nash (which later added Canada’s Neil Young). He is also credited with discovering Canada’s Joni Mitchell at a club in Florida in 1967 and helping her secure a record deal. He produced her debut album Song to a Seagull and had a relationship with her.

Graham Nash wrote in an Instagram post: "It is with a deep and profound sadness that I learned that my friend David Crosby has passed. I know people tend to focus on how volatile our relationship has been at times, but what has always mattered to David and me more than anything was the pure joy of the music we created together, the sound we discovered with one another, and the deep friendship we shared over all these many long years.

"David was fearless in life and in music. He leaves behind a tremendous void as far as sheer personality and talent in this world. He spoke his mind, his heart, and his passion through his beautiful music and leaves an incredible legacy. These are the things that matter most."

Stephen Stills also acknowledged his relationship with Crosby was less than perfect. “David and I butted heads a lot over time, but they were mostly glancing blows, yet still left us [with] numb skulls. I was happy to be at peace with him. He was without question a giant of a musician, and his harmonic sensibilities were nothing short of genius," he wrote in a statement. "The glue that held us together as our vocals soared, like Icarus, towards the sun. I am deeply saddened at his passing and shall miss him beyond measure."

Artists like Jason Isbell and Billy Corgan reacted to Crosby's death on social media and Hanson paid tribute by sharing their cover of "Teach Your Children" by Crosby, Stills, Nash & Young.

"I don’t know what to say other than I’m heartbroken," tweeted Brian Wilson. "David was an unbelievable talent - such a great singer and songwriter. And a wonderful person. I just am at a loss for words."

Calling it a "huge loss," Canadian singer Ron Sexsmith shared that he recently listened to CSN "and was always blown away by his voice and sense of harmony."

Born in Los Angeles to Oscar-winning cinematographer Floyd Crosby and Macy’s salesperson Aliph Van Cortland Whitehead, Crosby started performing in musicals while in elementary school. He briefly studied drama in college before dropping out to focus on music.

In 1965, Crosby found success with the Byrds thanks to their version of Bob Dylan’s “Mr. Tambourine Man” and Pete Seeger’s “Turn! Turn! Turn!” He recorded five studio albums with the group before being fired in 1967.

Crosby met Stephen Stills in 1968 and the two began jamming, eventually joined by Graham Nash of the Hollies. The trio’s self-titled debut album was released in 1969 and later, with Young onboard, the group had early hits like “Teach Your Children" and  “Just a Song Before I Go.” Crosby, Stills, Nash & Young disbanded in 2016.

In a 2021 interview with The Guardian, Crosby called Young “the most self-centred, self-obsessed, selfish person I know.” 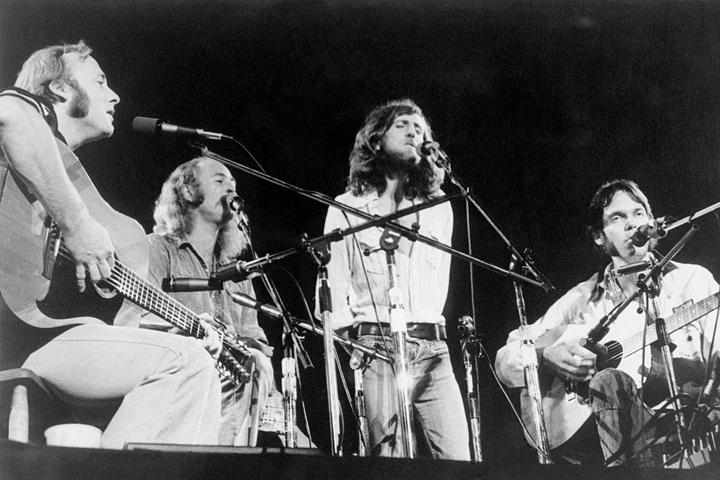 Michael Des Barres remembered Crosby as “a difficult and gifted man … whose talent and taste was immense. His harmonious voice still echoes in Laurel Canyon. A proud man who said what he said, and felt what he felt with no apology. A brilliant songwriter, and an American Icon.”

Veteran publicist Danny Deraney agreed. "He was his own man. He could be cantankerous, he could be a pussycat. That was Cros," he tweeted. "About as real as you could get."

On Wednesday, Crosby replied to a tweet about people with tattoos not going to heaven: “I heard the place is overrated… cloudy.”

Canadian rocker Sebastian Bach shared: "As much as I loved his music I loved his thoughts on Twitter as well. Rest In Peace David Crosby  thank you for the lifetime of inspiration."

Crosby was twice inducted into the Rock and Roll Hall of Fame – in 1991 as a member of the Byrds and in 1997 as part of Crosby, Still & Nash.

Crosby is survived by wife of nearly 36 years, Jan Dance, and their son Django as well as his son James Raymond and daughters Erika and Donovan from previous relationships. He was also the biological father of Julie Cypher and singer Melissa Etheridge's daughter Bailey Jean and late son Beckett.

"I am grieving the loss of my friend and Bailey’s biological father, David," tweeted Etheridge. "He gave me the gift of family. I will forever be grateful to him, Django, and Jan. His music and legacy will inspire many generations to come. A true treasure."

In The Guardian interview, Crosby said: “I’m right at the end of my life. I don’t have a lot of time left. I don’t know if I’ve found my way, but I do know I feel happy. I love my family, and the music’s coming to me. So, despite the fact that the world is in a shaky spot, I feel pretty damned good.”

Listen to music from David Crosby