It was five years ago this month that the Canadian frontman for rock band Sum 41 was discharged from hospital after suffering organ failure after years of hard drinking.

Today, the 39-year-old is in good health and not too interested in dwelling on his near-death experience. “I don’t even really think about it, to be honest,” he told iHeartRadio.ca, on the phone from a tour stop in France.

“It took me about a year-and-a-half, two years to get myself back into feeling normal again. Since then it’s kind of been like part ancient history, part just moving forward.”

Whibley’s also moving forward musically with Order in Decline, an unapologetic hard-rocking album (out July 19) inspired by the division, racism and hate swirling around the world. It’s all killer, no filler – and a long way from “Fat Lip.”

“It’s hard for me to hear old stuff or go back and listen to anything,” Whibley admitted. “I usually just hate it all. I can’t stand my voice.”

He described Order in Decline as the result of his natural evolution as a songwriter. (Whibley also produced, engineered and mixed the album in his home studio.)

“I pick up a guitar and start writing and whatever comes out, comes out. If it’s good or bad it’s up to other people really to decide that,” said Whibley. “I don’t really know. All I know is if it makes me excited and want to play it live then I feel like I’ve got something.

“When I write songs I write with an electric guitar through an amp, I turn it up loud and try to come up with riffs. If it makes me feel like I want to start jumping around in my own house, then I’ve got something.”

Whibley insisted he didn’t set out to write a political album. He wanted to use music as an escape from the chaos in the world, “especially living in the U.S. and the daily chaos of Donald Trump.”

He remembered: “I don’t want to sing about this a**hole. I don’t want his bulls**t to take over my music. So I kind of started fighting it, only to realize that it never works for me. If I don’t just follow what’s coming out, it just starts to sound like nonsense to me or doesn’t feel comfortable. There’s no connection to it.

Whibley, who grew up in the Toronto area, agreed that he views the world through a special lens.

“I’m an extremely proudly Canadian and I split a lot of my time between Canada and the U.S. and that gives you this crazy perspective, by just going back and forth,” he said. “But also traveling the world, too. Everybody has some form of their own division, hatred, racism, whatever it is. It may be about something different, but it’s the same f**king thing wherever you go. It’s just some different person who’s fanning those flames. Everyone has their own version of Trump.”

Whibley said when he’s back home in Canada, he feels like he can chill a little more. “You know, it’s like, ‘Awww, f**king back to normal.” 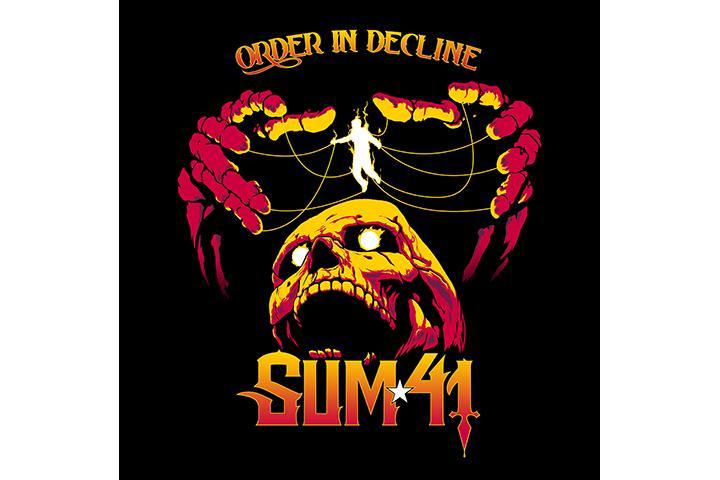 Sum 41's new album has already spawned the singles "Out For Blood" and "A Death in the Family" as well as "Never There," a powerful ballad about the father Whibley never knew. (Read about the story behind the song here.)

There is an order to Order in Decline, Whibley said, so he hopes fans will listen to it from start to finish.

Whitely and his Sum 41 bandmates Dave Brownsound, Tom Thacker, Cone McCaslin and Frank Zummo will be in Canada this summer. They perform in Saskatoon on Aug. 6, Toronto on Aug. 8, and in Victoriaville, QC on Aug. 10. Sum 41 returns for a Nov. 2 gig in Edmonton.

Just don’t expect to hear much from Whibley while he’s on the road. He’s not on Twitter and uses Instagram sparingly.

“It’s not really my world. I don’t really love that kind of stuff,” he said of social media. “I don’t mind posting a photo now and then, I might answer a couple of questions here and there if I see something at that time, but I don’t really spend much time on my phone. My phone is just my phone, so I don’t really have apps or anything like that.

“It’s just not really my interest.”