Drake and Chris Brown appear to have made some amends, after fans took notice that the two hip-hop heavyweights re-followed each other's Instagrams over the weekend.

Tensions first arose between Drake and Brown in 2012, during a night out partying at a New York City nightclub where Brown allegedly sent a bottle over to the Canadian rapper, who reportedly refused the gesture and sent a note back informing Brown that he was, at the time, dating Rihanna, Brown's ex-girlfriend. A brawl quickly broke out as the two artists began throwing bottles and punches at each other, according to Complex.

As the hip-hop world mourns the death of 26-year-old rapper Mac Miller, who was found dead in his home of an apparent overdose on Friday, fans are speculating that the Scorpion rapper was prompted to make peace with Brown again. 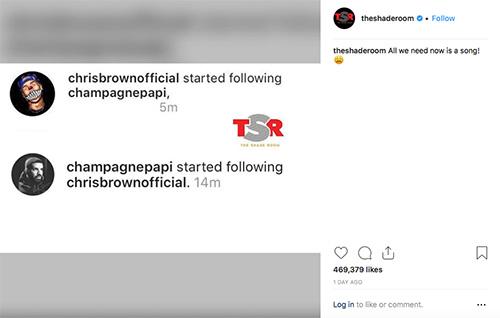