Construction of Drake’s Toronto mansion is underway, according to a photo the rapper shared on Instagram over the weekend.

The pic offers a view from above — showing the framing on the 21,000-square-foot home’s second floor.

“Manifested this one from time,” reads the caption, which gives a shout out to architect Ferris Rafauli.

The mansion is located on Park Lane Circle in Toronto’s upscale Bridle Path neigbourhood, where Prince once lived with his Canadian wife. Drake’s neighbours include singer Gordon Lightfoot. Around the corner is the estate that was used as the home of Rachel McAdams' character in the 2004 movie Mean Girls.

It’s not known how much the former Degrassi star is spending on his new hometown pad but the two-acre parcel of land was purchased last September for $6.7 million. 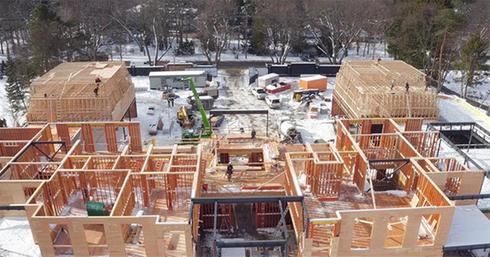 Drake’s photo shows the front of the mansion at the top of the photo. On the left is a multi-vehicle garage and on the right is where the indoor 44-foot-by-94-foot basketball court will be.

When it’s all done, Drizzy Manor will boast rooms to display jerseys and awards plus a pool, spa, gym, bar (with a champagne chamber), music room, library and home theatre.

The master bedroom area (on the right side of the photo) includes two dressing rooms and a steamroom. There are four other bedrooms in the home.

The estate is a huge step-up for Drake, who started from the bottom of a rented townhouse in Toronto with his mother.

After becoming a rap superstar, Drake bought a 3,600-square-foot condo in Toronto’s posh Yorkville area. He sold it in 2013 for $3.75 million.

He also owns a mansion in Los Angeles.

Drake’s Boy Meets World tour is back in England this week and moves through Europe until the end of March.