Ed Sheeran suffered a broken arm Monday when a car knocked him off his bicycle on a London street.

"I’ve had a bit of a bicycle accident and I’m currently waiting on some medical advice,” the singer shared on Instagram, “which may affect some of my upcoming shows.”

Sheeran posted a photo showing his right arm in a cast.

The superstar is on a break from his world tour, which is set to resume in Taipei on Oct. 22.

The 26-year-old has concerts scheduled throughout Asia and Australia. 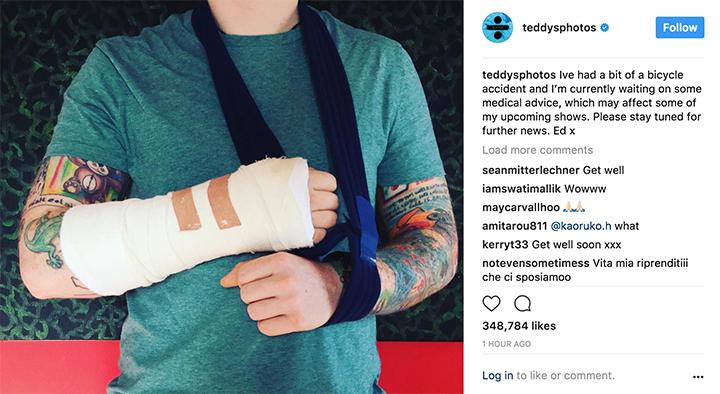 Last November, Sheeran suffered a cut to the cheek after Princess Beatrice accidentally sliced him with a sword.

In November 2014, U2 frontman Bono suffered a horrific arm injury after crashing his bicycle in New York's Central Park. Two months after the accident, the singer told fans he wasn't sure he would ever be able to play guitar again.