Eminem Under Fire For Homophobic Slur

Eminem surprised fans Friday with the release of his 10th studio album, Kamikaze, but quickly came under fire for his song “Fall” which features homophobic slurs aimed at fellow rapper Tyler, The Creator.

“Tyler create nothin’, I see why you called yourself a f****t, b***h / It’s not just ‘cause you lack attention, it’s ‘cause you worship D12’s balls, you’re sacrilegious,” Eminem raps on the track.

Earlier in “Fall,” Eminem opens with “you know, everybody’s been telling me what they think about me for the last few months, maybe it’s time I tell them what I think about them.”

Many fans are betting that Eminem’s shots are in response to Tyler’s previous critiques of the Detroit rapper’s 2017 “Walk On Water” track, when he tweeted “dear god this song is horrible, sheesh how the f**k.”

In response to the lyrical controversy, some fans have flocked to Twitter to defend Eminem’s use of the anti-gay term, pointing out that the rapper may have been simply quoting Tyler’s own use of the word in his work. 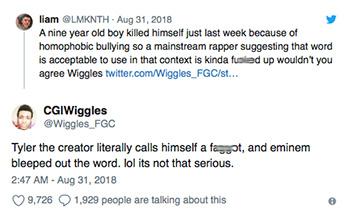 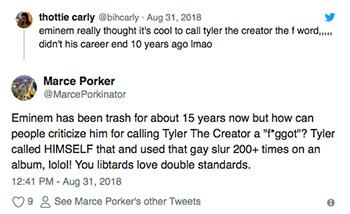 Listen to "Fall" below (Warning: Contains language that some may find offensive):